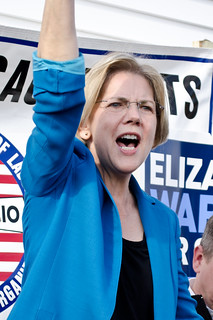 Fortune magazine announced Tuesday that it had obtained "the final word on a White House run" from Elizabeth Warren.

Interviewing Warren for Fortune, former FDIC chairman Sheila Bair asked: "So are you going to run for President?"

"No,"replied the senator from Massachusetts.

That blunt response came amid a burgeoning "Ready for Warren" movement to draft the outspoken critic of Wall Street abuses into the 2016 presidential race as a progressive populist alternative to former Secretary of State Hillary Clinton, the as-yet-unannounced front-runner for the Democratic nod.

The draft movement is real, and it has gathered traction nationwide.

"Run Warren Run" activists are already working on the ground in the first caucus state of Iowa. And, on Saturday, in Manchester, New Hampshire, Democracy for America and MoveOn.org Political Action members are set to formally launch the "Run Warren Run" effort in the first primary state.

The advocates for a Warren run are not backing off.

"We understand that reporters are required to follow every twist and turn of the 2016 race, but let's be clear: this isn't a new position for Senator Elizabeth Warren. Senator Warren has been clear for years that she isn't planning on running. If she were running, there wouldn't be a need for a draft effort," explained MoveOn.org and Democracy for America activists in a Tuesday response to the Fortune interview. "We launched the Run Warren Run campaign to show Senator Elizabeth Warren the tremendous amount of grassroots enthusiasm and momentum that exists for her entering the 2016 presidential race and to encourage her to change her mind."

Those grassroots groups are right.

Sincere draft efforts invariably begin with a reluctant candidate. The key is to stir up enough support to get a non-candidate -- even one who says "no" -- to reconsider.

For now, it makes sense for the "Run Warren Run" initiative to continue. The caucuses and primaries are a year off. There are no looming filing deadlines. This is the clearest window of opportunity for activists who would draft a candidate into the presidential competition of either party.

The Democracy for America and MoveOn folks are right that, in politics, the word "no" is not always a conversation-closer. It's clear that a lot of Democrats, as well as independents who lean toward the Democrats, want an alternative -- or several alternatives -- to Clinton, whose past positions on war and peace, trade policy and corporate power have troubled progressives and populists within the party, as well as independents who lean to the left.

Related Topic(s): Caucus; Draft; Moveon; Politics; Presidency; Senator Elizabeth Warren, Add Tags
Add to My Group(s)
Go To Commenting
The views expressed herein are the sole responsibility of the author and do not necessarily reflect those of this website or its editors.