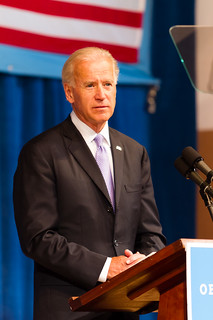 Joe Biden
(Image by Tschi)   Details   DMCA
>
Election time always is accompanied by speculations. Just look right now at Bush's poor skills at campaigning showing themselves with multiple repetitions and flip flops and Trump demeaning him in the eyes of the voters who may have thought there was something there.
Bush is becoming already almost a "has run"...and with so much money left in his campaign cache.
And Hillary, Biden's coming after her? What's that?
Politics has no transparency, so we speculate. We look at the known factors and deduce projections. Polls have been taken revolving around Hillary's personality, her sense of entitlement, the public's view of her hubris in exposing classified information in her emails-in direct junxtaposition to whistleblowers who are already paying a price and with the knowledge, like Petraeus, a slap on the wrist to the privileged will be the likely outcome.
Or is Biden the spoiler? Do the string pullers see the threat of Sanders too overpowering to a shoe in for Hillary? The game of politics are full of nefarious manipulations.
Bush, with all his money backing, was supposed to be sitting pretty smugly on top of the heap among the Republican wannabes, while Hillary is being outnumbered by huge rallies for Sanders...and it's still early in the season.
Is the American electorate, at the very least, just tired of the same old, same old and looking elsewhere, anywhere, or is there an awakening going on that has finally seen through the game to the wizard behind the curtain and the connection has been made that's why the economy is the way it is and why our government is throwing away money on easily seven wars and counting?
And will our Corporate Enabling Media continue to pretend Biden is a serious candidate instead of at least putting the thought in the ear of the electorate that there is such a thing as dropping a wrench in the machinery when the choice of the 1% is being threatened

Concerned citizen, free lance writer from San Francisco, CA.,part of the Occupy Movement in San Francisco since its inception on September 17, 2011, and a member of Codepink

Related Topic(s): Politics; Republican, Add Tags
Add to My Group(s)
Go To Commenting
The views expressed herein are the sole responsibility of the author and do not necessarily reflect those of this website or its editors.

The Truth Beneath the Downing of Flight MH17

Burnt Alive vs. Shock and Awe