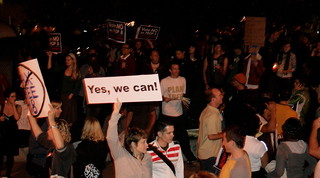 Yes We Can
(Image by mattymatt)   Details   DMCA

We can do it. We can provide a fair income to all citizens while limiting disparities in economic, social and political powers.

In the United States today there are about 324 million people including about 74.5 million under the age of 18 leaving an adult population of about 249.5 million. But adult population should also include all emancipated children, members of the armed services and expectant mothers under 18 years of age. If you paid every one of them an income to raise them out of poverty, say the current suggested minimum wage of $15.00 per hour, you would have to pay them all $2,600 a month or $31,200 a year for a total cost of a little over $10 trillion a year, or a little under $7.8 trillion if you deducted the persons under 18. Where can we get so much money?

The first place to look is at budget transfers from current expenditures. Let's start with social security as this would completely replace all current social security retirement benefits, with a substantial raise in benefits as the current highest monthly rate is just about $2,220 and most retirees do not receive anywhere near that amount. In 2013, the total Social Security expenditures were $1.3 trillion, and probably exceed $1.5 trillion when we include Food Stamps (SNAP), Earned Income Tax Credit (EITC), and Housing assistance, Child Nutrition Program (CHIP), Support Payments to States, TANF, Feeding Programs (WIC & CSFP), and Low Income Home Energy Assistance programs.

We have the expenditures of federal employees who earn beyond the poverty class. The reduction in federal payroll should reduce and free up something more than $2.5 Trillion based upon 2014 reported total number of employees both civilian and military of over four million.

There are also independent agencies such as the United States Postal Service, with over 450 thousand employees, employees with the National Aeronautics and Space Administration (NASA), with 18 thousand the Central Intelligence Agency (CIA), the Environmental Protection Agency (EPA), and the United States Agency for International Development (USAID). In addition, there are the employees of the government-owned corporations such as the Federal Deposit Insurance Corporation (FDIC) and the National Railroad Passenger Corporation, Tennessee Valley Authority, General Services Administration, Small Business Administration, and Office of Personnel Management with an additional 98 thousand employees

We are talking of possible budgetary transfers of at least another three trillion dollars leaving about $2 trillion to be made up by the increased tax revenues From the stimulated economy, the Profit Tax and, and as necessary for the guaranteed income as well as more equitable wealth distribution, an increase on the personal and corporate high income tax brackets. The funds are all there and probably more than needed to reach the $15.00 an hour minimum wage suggestion taking that pressure off American business. Anti-abortionists should love this as it provides needed income to the parent and child that would be carried to term.

We can argue what is the fair income for the corporate, business, financial and entertainment leaders of the country. Should the income be capped at 100 times basic guaranteed income ($3,120,000) or twice that ($6,240,000) before 100% tax rates are applied to the excess. Do we believe that in comparison to all others (school teachers, laborers, truck drivers, enlisted armed service men and women and others) it is fair, or are they worth more? The point is that we have the means to create a more equitable, and politically and socially equitable society if we chose.

States receive a great bounty as they take back wealth on death through taxes, and taking properties considered abandoned at death, and that cannot be claimed without allowing unjust enrichment. The states could limit what is considered inheritable, such as estates greatly exceeding the current values of family business or family farms. The states would also be relieved of many current welfare and related expenses and watch their sales and income tax revenues rise.

Two short issues remain to be addressed in disparities of power, Corporations as people and money as speech, Citizens United v. Federal Election Commission. Many things can be considered speech and we cannot fault reasoning that money can be used as speech as long as the courts are willing to recognize that it can be more than speech. That is why it is so necessary to remove the great disparities in wealth. Corporate person-hood has long roots in Anglo-American law. The simplest way to limit certain corporate defenses of person-hood is to pass a clarifying amendment to the 14th amendment stating that where ever used in that amendment, the word person shall only refer to human persons when considering questions of expression; but even this needs to be carefully considered. Beware of fancy amendments, as you probably will not know all that is covered in those proposals. I recall my Federal Tax professor over fifty years ago reminiscing over his time with the senior members of the IRS. Congress would pass a new exemption or deduction and the staff would scratch their heads trying to figure out what congress had in mind until a tax payer just happened to file a return that applied the new law exactly to the situation set forth in that tax return.

STAY IN THE KNOW
If you've enjoyed this, sign up for our daily or weekly newsletter to get lots of great progressive content.
Series: "FAIR INCOME, POLITICAL AND EQUITABLE WEALTH DISTRIBUTION"