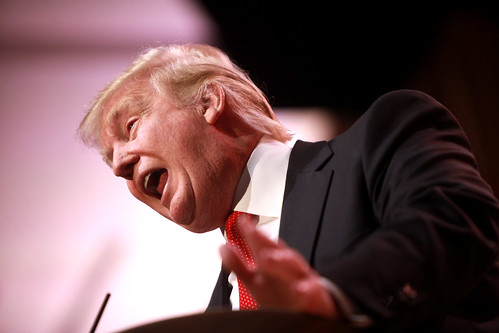 To many hard-working people, this is a time of economic uncertainty. Thus, it is important to point out that America's super-rich are intentionally and brazenly knocking down the middle class and poor to further enrich themselves. They are aided by clueless, corrupt politicians who don't care about the future of ordinary Americans or of America itself. In these hard times, along comes Donald J. Trump, a swaggering billionaire braggart promising greatness by goading working-class white people into mollifying their pain and anxiety by despising those "other people" situated near them on the social-economic ladder.

The media establishment has erroneously put the "populist" crown on Trump, endorsing his absurd assertion that he might be a billionaire, but he's "our" billionaire, fighting for us commoners!

I'm not telling anyone how to vote, and I certainly understand the inclination to grab the biggest stick you can find to whack the bejeezus out of those holding you and your family down. Trump has sold himself as the biggest, baddest stick around, the "outsider" who pummeled Jeb!, Marco, Ted, and the entire Republican establishment.

But I am here to say, don't be a sucker. There's not a single populist muscle in Donnie's whole plutocratic body. He will sell out wage earners, small business people, and anyone else to serve his own needs or whims, as his lifelong record (as opposed to his recent rhetoric) reveals.

Donnie learned from Daddy Fred, who built his son's inherited fortune by milking federal housing programs in the 1940s and '50s, and then -- as the landlord of these New York City apartments -- flagrantly discriminated against black applicants. One of Fred's tenants was Woody Guthrie, who was so appalled, he wrote about Trump's greed and racism.

Donnie has enhanced his fortune by emulating his father's business ethics, including engaging in wage theft, outsourcing his clothing line and other brand-name products to such low-wage countries as China and Vietnam, and underpaying undocumented immigrants engaged in dangerous construction work on his luxury projects. Also, as of this summer, Trump or his companies were defendants in 1,300 lawsuits -- many of which were over stiffing cabinet makers, plumbers and other small business suppliers.

Candidate Trump grandiosely says he'll lift up the middle class, but his proposed economic policies would do the opposite by expanding the GOP's old anti-labor agenda: giving massive new tax cuts to corporations and the rich, slashing public spending on programs that working families rely on, and embracing the laissez-faire ideological claptrap that Tea Party Republicans mindlessly repeat in their ceaseless efforts to drive down wages. On the minimum wage, he's taken more positions than you'll find in the "Kama Sutra."

First, he said $7.25 an hour was already too much; then he called for abolishing the wage floor entirely; then he mused that he might be open to an increase (but certainly not the $15-an-hour living wage that worker activists are fighting for). Even Trump's "rock-solid" opposition to NAFTA, the Trans-Pacific Partnership, and other trade scams now looks to be a political bait-and-switch fraud, as indicated by his choice of Indiana Gov. Mike Pence to be his VP and top policy "partner." Pence is a notorious free-trade fanatic who pushed zealously to pass all eight trade deals that came before him while in Congress, and he's been lobbying hard this year for passage of the TPP.

Now, consider whom he's vilifying, mocking and bullying at his rallies and in his tweets. Overwhelmingly, they are terrorized migrants, Mexican immigrants he labels "rapists," black protesters experiencing police brutality, disabled individuals, and so on. This pampered son of privilege wants America's hard-hit, angry working people to elect him because he demonstrates the "courage" to be politically incorrect by kicking the poor, the powerless, and the marginalized. Since he's willing to do that, how long will it take him to throw those workers into the ditch, too?

Some might see Trump as a brilliant, can-do corporate chieftain (though his multiple bankruptcies among other business disasters make that assessment doubtful). Or they might be tempted to cast a protest vote to throw the political class into disarray. But people should consider the consequences and not fool themselves into thinking Trump's a populist who'll be on our side. In his heart, mind, and whole being, the central political truth about Trump is that he's foremost a Trumpist -- of, by and for himself.

To find out more about Jim Hightower, and read features by other Creators Syndicate writers and cartoonists, visit the Creators Webpage at www.creators.com.

Related Topic(s): Donald Trump; Donald Trump Lies; Fraud; Immigrants; Privilege, Add Tags
Add to My Group(s)
Go To Commenting
The views expressed herein are the sole responsibility of the author and do not necessarily reflect those of this website or its editors.