Many thought the GOP nominee would become more centrist for the general election, but he keeps advocating cruel and brutal tactics 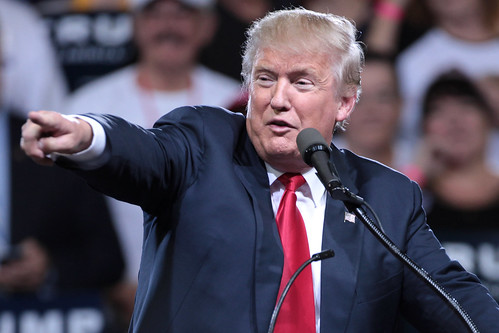 Instead of tacking to the center like a lot of pundits thought he would when he became the Republican nominee, Donald Trump seems intent to double down on his moral depravity, calling for outright war crimes in his quest to become US president.

On Wednesday he told a crowd of supporters that to defeat Isis, the US needs to "fight fire with fire." As NBC News put it, this "seemingly [made] the case for using similarly brutal tactics as terror groups like Isis have in the past." He once again declared the US should return to waterboarding terror suspects, a tactic that is obviously torture (and was once prosecuted as such after the second world war). And he has repeated his calls for inventing "interrogation" techniques that are "worse" than waterboarding as well.

Trump, as you will remember, spent much of the GOP primary spouting all sorts of nonsense about how waterboarding "works" (even though we know it doesn't), that he would happily bring back torture in the "war on terror" fight (even though it's blatantly illegal) and that he would kill the family members of suspected terrorists (despite the general agreement across the political spectrum that that is a war crime as well).

He shows no signs of stopping his increasing descent into unhinged lunacy since the Orlando terrorist attacks, after which he immediately said he "appreciate[s] the congrats for being right on radical Islamic terrorism" after 49 people were brutally murdered, even though there's little evidence the shooter was radicalized, and then he went on to absurdly suggest that Barack Obama was secretly working with Isis.

Trump's attempts at qualifying his proposals might be considered hilarious if they weren't so appalling. In March, he attempted to "clarify" his calls for more torture by saying that the US needed to "broaden" the laws on the books that make it illegal instead of just immediately violating them. (He could also just radically "re-interpret" the laws on the books just like the Bush administration did.) Last week, he claimed that his "ban all Muslims" policy proposal really only meant that he wanted to ban all Muslims that come from Muslim majority countries, as though that wasn't just as bigoted and offensive as his original proposal.

Related Topic(s): Crimes Against Humanity; Donald Trump; Torture; Trump Campaign, Add Tags
Add to My Group(s)
Go To Commenting
The views expressed herein are the sole responsibility of the author and do not necessarily reflect those of this website or its editors.