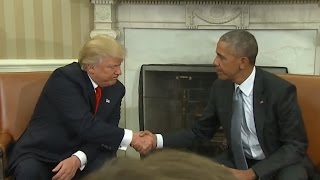 The near-impossible has happened, and Donald Trump is three months from being President Trump. From local elections to the presidency, this general election may have been the most vicious since Thomas Jefferson challenged John Adams in 1800. Both major candidates turned to attack ads to enhance their own campaigns.

Donald Trump flourished on the seeds of hate planted by the Tea Party, and then played out the dictum of Joseph Goebbels that if you keep telling lies long enough and blend them with propaganda, they will turn into truth. From the moment he entered the presidential race until his final triumph, he kept hammering on two themes. The first strategy was to push the premise that under President Obama the United States had lost its greatness and only Donald Trump could restore it. To this concoction he then brilliantly added fear to the mixture. Name a fear--any fear--and and it was probably in Trump's campaign rhetoric. The first part of that fear was immigrants bringing drugs and guns from Mexico and central America; the second part was that Radical Islamic terrorists were coming to America from the Middle East. He also instilled the fear that Hillary Clinton would take away the Second Amendment right if she became president, something no president could do under the Constitution. Finally he coated his campaign against Hillary Clinton's with constant Benghazi and e-mail scandals and kept repeating it at every rally, and he had a product he force fed to a gullible public.

Hillary Clinton improved her communication with voters near the end of the campaign, but for much of the campaign she was protected by a phalanx of assistants who kept her unapproachable except for photo ops. She should have shut down the e-mail and Benghazi scandals much earlier than she did; several Congressional hearings had already proved she was not at fault. The flip-flop press conferences by FBI director James Comey also led the voters to believe she may or may not have been at fault in both scandals.

The Libertarian party cut into Trump's base, and the Green Party cut into Clinton's base, but neither was strong enough to cost either candidate the election.

The Establishment Media at first dismissed Trump's politics as just another sideshow. But, Trump kept making outrageous comments, and the media kept acting as his personal mouthpiece without doing much fact checking any of his rhetoric. Trump boosted his candidacy by using the media to attack what he continually called the lyin' liberal media. He gained momentum with each tweet and every rally, proving he didn't need the establishment media to arouse a fan base.

The Voters allowed themselves to be led by Trump who appealed to their frustration with establishment politics and their alienation from government. Trump emphasized he was an outsider, even though he and the SuperPACs were more inside the beltway politics than most candidates. Trump's core was white alienated males who didn't have college degrees; Clinton's core was college-educated men and women.

Each candidate relied on the power of outside organizations to further gain traction in the race to the presidency. For Clinton, it was primarily organized labor; for Trump, it was the Chamber of Commerce and the NRA.

By Nov. 8, almost all polls had predicted Clinton would win the presidency. There was one problem--they were wrong. They underestimated the strength of rural America and overestimated the weakness of urban America.

At the end of the day Clinton had had more individual voters, but Trump had more electoral voters and the presidency.

The next campaign began Nov. 9.

Related Topic(s): March Against Mainstream Media; March For Justice; Presidency, Add Tags
Add to My Group(s)
Go To Commenting
The views expressed herein are the sole responsibility of the author and do not necessarily reflect those of this website or its editors.