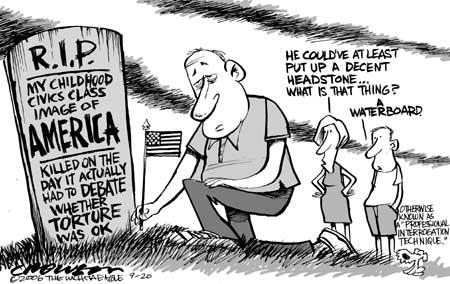 Back in the Fall of 2005 I wrote a essay, published in the journal Logos (issue 4.4), entitled "Torture in our Time."  In it I laid out the historical evidence for the conclusion that torture rarely works. This position goes back at least to the Enlightenment when Cesare Beccaria wrote a famous pamphlet, "On Crimes and Punishments" (1764) in which he observed the obvious:

"The impression of pain, then, may increase to such a degree that, occupying the mind entirely, it will compel the sufferer to use the shortest method of freeing himself from torment....He will accuse himself of crimes of which he is innocent so that the very means employed to distinguish the innocent from the guilty will most effectually destroy all difference between them."

Along with false admissions of guilt, those under torture will tell their tormenter just about anything, regardless of truth and accuracy. Modern researchers, and even modern practitioners of interrogation, know this to be so. They have come to the same conclusion as Beccaria. Torture produces more false and fictional information than not.

For instance, Darius Rejali in his book Torture and Democracy (2009), tells us that "the available evidence [against the efficacy of torture] is conclusive" and alludes to the fact that, for 250 years, criminologists, and psychologists have been pointing this out. The ex-intelligence officer, Colonel John Rothrock, who headed a combat interrogation team in Vietnam, told the Washington Post in 2005 that, given the Vietnam experience, "he doesn't know any professional intelligence officers of my generation who would think this [torture] is a good idea" even in a so-called "ticking bomb" scenario. The inclusion of "my generation" in Rothrock's statement implies that each generation has to learn the truth about torture anew, over the wreckage of newly broken bodies.

More recently, in December 2012, the Senate Intelligence committee approved a report  which, in some 6,000 pages, concludes that "the harsh interrogation measures used by the CIA [that is the torture techniques allowed by the administration of George Bush Jr.] did not produce significant intelligence breakthroughs." This specifically includes the production of intelligence leading to the discovery of Osama bin Laden. Indeed, the report says that torture actually became "counterproductive in the broader campaign against al-Qaeda." All this has led Dianne Feinstein (D-Calif.), the chairman of the Senate intelligence committee, to call Bush Jr.'s secret CIA prisons and use of torture, "terrible mistakes."

For a certain subset of the population (and not just in the U.S.) these truths do not matter. This subset constitutes a modern warrior caste and their followers. The American sampling includes many (but not all) neoconservatives, classic tough-guys turned politicians, faux-realists, military professionals, and an ever-present small number of people who just like to hurt and humiliate others and find their way into professions that allow them to do so (often the actual torturers). For all these folks the evidence against torture appears counter-intuitive and just does not "feel right."

Therefore, intuitively, these skeptics feel more comfortable with another statement, that might be juxtaposed with Beccaria's above. This one was written by White House Counsel Alberto R. Gonzales, in a memorandum for President Bush on January 25, 2002:

"The nature of the new war places a high premium on...the ability to quickly obtain information from captured terrorists in order to avoid further atrocities against American civilians. In my judgment, this new paradigm renders obsolete Geneva's [the Geneva Convention Against Torture] strict limitations on questioning of enemy prisoners..."

Currently, it is the Republican Party that harbors many of the skeptics who share this opinion about the efficacy of torture and the "obsolete" nature of the treaties (ratified by the United States) forbidding it. The Republicans on the Senate intelligence committee that issued the latest report proving torture's uselessness, even refused to participate in the report's investigatory process. For some of them this might have been the result of obeying their party's dictate to remain loyal to the discredited Bush administration. For others though, it was loyalty plus their belief (in the face of all the evidence to the contrary) that Bush was correct to send the CIA out into the world to cause unbearable pain and suffering. They believe such behavior materially contributed to "making America safe."

Unfortunately, there is a general tendency on the part of Americans to agree with the skeptics. And, this trend is about to be strengthened. There is now a movie, Zero Dark Thirty (the work of the Oscar-winning director Kathryn Bigelow) in U.S. theaters that will reinforce the erroneous view that torture works. Zero Dark Thirty purports to tell the story, based on "first hand accounts," of the hunt for and killing of Osama Bin Laden. According to this film, torture formed a "critical aspect of intelligence gathering" process. There is good evidence that the U.S. government assisted in making the movie, if not in the actual writing of the script.

It would be nice if some talented director could make a movie, based on "first hand accounts" of the making of the Senate report on Bush-era torture. But that sort of movie will not be made because Washington has no desire to tie its hands in this regard. Nor will the truly accurate documentaries (see below) that do exist on the prison camp at Guantanamo Bay, or the now defunct hell-hole that was Abu Ghraib, get national distribution. However, we can expect many more films like Zero Dark Thirty. This is because the recent 2013 National Defense Authorization Act (NDAA) signed by President Obama makes legal direct government funding of propaganda aimed at the American population.  Perhaps the U.S. government is about to buy its own back-lot in Hollywood.

There is a story about Abraham Lincoln that claims that every time he was confronted by someone extolling the benefits of slavery, he had a desire to see it (slavery) tried out on the one defending it. Torture can be approached the same way. Does President Bush Jr. and ex-counsel Alberto Gonzales think it is a vital part of America's defense?  Do all those Republicans on the Senate intelligence committee have such faith in torture that they can dismiss out of hand 6,000 pages of contrary evidence? OK. Let's see torture tried out on these fellows and note whether they will confess to false reports about, say, their sex lives.

Just wishful thinking. The torturers we are talking about are all past or present powerful government officials and their henchmen. Most of them will die in bed and maybe, someday, have their face put on a postage stamp. Their horrid deeds, already excused, will soon be forgotten. For what are crimes when committed by the average person, but vices when committed by the powerful (so said Benjamin Disraeli). Finally, it has been known for ages that, as the old Latin saying goes, "in times of war the laws go silent."

Related Topic(s): Domestic Terrorism; Torture; Torture Memos, Add Tags
Add to My Group(s)
Go To Commenting
The views expressed herein are the sole responsibility of the author and do not necessarily reflect those of this website or its editors.