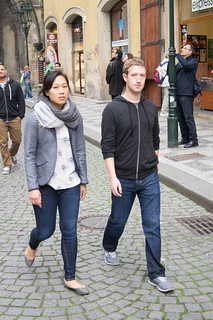 The claim: Today's rich are giving more than ever to make the world a better place, and we should all be cheering this magnificent generosity.

Have you heard? Facebook founder Mark Zuckerberg and his wife, Dr. Priscilla Chan, are giving away 99 percent of their Facebook stock, a contribution currently worth about $45 billion.

You probably have heard. Zuckerberg and Chan announced their new philanthropy on Facebook, and the post quickly drew 1.5 million thumbs-up -- and headlines worldwide. Their gift, reporters noted, over doubles the combined wealth of the Ford, Rockefeller, and Carnegie foundations.

Facebook founder Mark Zuckerberg is giving the world a new twist to 'giving.'

"We have a moral responsibility to all children in the next generation," Zuckerberg and Chan noted in their Facebook announcement, "We believe all lives have equal value."

But if all lives have equal value, shouldn't all the people living those lives have somewhat of an equal say in determining humanity's future?

The new Chan Zuckerberg Initiative is taking us in the opposite direction. The pair have promulgated, quips analyst James Quack, what amounts to a "keeping pledge," not a giving pledge. They pledge to keep all their wealth and use a lot of it to make the world a better place, as long as they get to define "a lot" and "better."

The wealthy have the power to impose their personal visions of the common good.

We also need to keep in mind, adds Institute for Policy Studies wealth tracker Josh Hoxie, that Zuckerberg owes much of his fortune to the public investments made possible by the tax dollars of average citizens.

These investments, Hoxie points out, funded "the public schools that educate his employees, the judicial system that protects his intellectual property, the public telecommunication networks that enable people to use his product."

Shouldn't the public, the source of those public investments, now have a say in where the Zuckerberg billions go?

In fact, observes the Guardian's Gaby Hinsliff, we already have "a centuries-old system" for ensuring the public that say, "for ensuring the very rich can do good for others." We call that system taxation, and, in a healthy democracy, the public gets to decide where tax dollars go.

The very rich have little patience for this democratic process. The Chan Zuckerberg Initiative, sums up policy analyst Joanne Barkan, ought to refocus our attention on mega philanthropy's most fundamental contradiction: that "the wealthy have the power to impose their personal visions of the common good on everyone else while calling it charity."

"Many will view donations like Mr. Zuckerberg's," the Economist business magazine observes, "as a reason not to worry about the intense concentration of wealth."

We should still worry.

Related Topic(s): Billionaires; No Billionaires Debillionairize; Wealth Poverty Class, Add Tags
Add to My Group(s)
Go To Commenting
The views expressed herein are the sole responsibility of the author and do not necessarily reflect those of this website or its editors.