Click Here to Remove All Ads
Social conservatives backing his campaign may want to ask him a few questions. 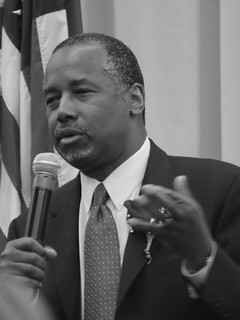 Ben Carson, the retired neurosurgeon and political novice, has leaped to the head of the GOP's 2016 pack in Iowa. The most recent Des Moines Register poll placed him in the lead with 28 percent, and this surge is undoubtedly fueled by religion. In the survey, he was backed by 33 percent of born-again Republican Christians, a hefty voting bloc in the first-caucus state. (In a Monmouth University poll this summer, he was the first choice of 29 percent of Iowa evangelicals.) Moreover, a whopping 89 percent of the Republicans in the Register poll said they found Carson an attractive candidate because he has vowed his actions will be guided by his faith in God.

Religion and politics can make a volatile mix. In the case of Carson, this overlap is an essential part of his success. Yet it is odd that Carson has done so well with evangelicals when he is a high-profile and devoted member of a church that teaches that almost all evangelical Christians will soon join with Satan to oppose Jesus Christ.

Carson is a Seventh-day Adventist who has publicly voiced his commitment to this church and championed its core beliefs, most notably the view that God created the world in six days (literally) and that evolution is bunk (and encouraged by the devil). He has spoken at Seventh-day Adventist events. In a 2013 interview with the church's official news service, he was asked, "Are there ever any times when you feel it's best to distinguish yourself from the Seventh-day Adventist Church and what it teaches?" Carson replied, "No, I don't."

David Corn is  Mother Jones ' Washington bureau chief. For more of his stories,  click here . He's also  on  Twitter  and  Facebook .  RSS  |  TWITTER  David is (more...)
Related Topic(s): Ben Carson; Evangelical; Republican, Add Tags
Add to My Group(s)
Go To Commenting
The views expressed herein are the sole responsibility of the author and do not necessarily reflect those of this website or its editors.