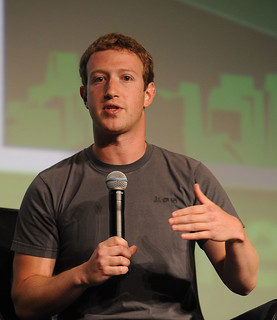 CEO Mark Zuckerberg promises to give 99% of his Facebook shares to charity -- eventually.

Exact phrasing: the stock, currently worth $45 billion, will be donated "during [he and his wife's] lives." He's 31 and she's 30, so actuarial tables being what they are, by approximately the year 2065.

If Facebook or the Internet or the earth still exist.

I would be far more impressed if Facebook would put some money into the American economy. How? By hiring more workers -- a lot more workers. Facebook's market cap is $300 billion -- almost 10 times more than GM. GM has 216,000 employees. I'm not sure Facebook could find work for 2 million workers -- but 12,000 is pathetic. They might start by hiring a few thousand 24-7 customer service reps so they could respond quickly when some antisocial pig posts your nude photo.

The part of the "ain't Zuck nice" philanthropist suck-uppery that really has me annoyed is the "charity" bit.

Disclosure: I'm on record as being not at all into charity. If something is important enough to require funding -- helping hurricane victims, sending doctors to war zones, poetry -- it ought to be paid for by society as a whole, out of our taxes. We shouldn't allow billionaires to aggregate enough wealth to billionaires in the first place. Partly, this is because it's unfair. No one can work hard enough to earn one billion dollars. Also because it gives too much control to individuals at the expense of the 99.99% of everyone else.

Unfortunately, we await the revolution. So we still have billionaires running around pretending to be nice (as opposed to where they belong, hanging from a lamppost).

Even by our current dismal standards, however, Zuck is full of crap.

Point one: the Chan Zuckerberg Initiative is not a charity. It's a limited liability corporation (LLC) that, like any other company, can donate to actual charities but can also invest in for-profit companies.

Point two: this is all about control.

A donation to an independent, classic 501(c) charity can come with strings attached -- the money is only for a children's wing of the hospital, no adults -- but it's ultimately spent by the charity based on its directors' decisions. Under the LLC structure Zuckerberg will maintain nearly dictatorial control over the funds he's "donating" to "charity."

It's the difference between you giving a hundred bucks to the United Way, and taking a hundred bucks out of your wallet and dropping into a coffee can in your kitchen. Maybe the C-spot in the coffee can will go to the poor. Maybe not. It certainly isn't accurate to claim you gave it to charity.

"Zuckerberg To Maybe Eventually Do Things He Deems Good With Some Of His Fortune" would be more accurate.

Related Topic(s): Charities; Facebook; Generosity; Mark Zuckerberg; Workers, Add Tags
Add to My Group(s)
Go To Commenting
The views expressed herein are the sole responsibility of the author and do not necessarily reflect those of this website or its editors.