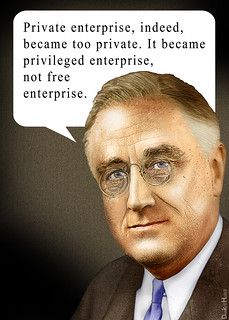 Listen to FDR - Stop SOPA and PIPA Because of .monopolization., becoming Free for .the few. and not for .The Many..
(Image by DonkeyHotey)   Details   DMCA

(22) We The People, Of The "New Direct Democracy Republic Common Wealth United States Of America" declare, insist upon and establish, Our Right to bring under control, the imbalances and depredations of Capitalism and find ways to make it a more suitable service for Our New Ways Of Governance and Life, or replace it with a "better" economic system. ("Mutualism", "Steady State Economy System", etc)

One of the goals of this "Right Of The American People" is to limit the size and power of corporations, so that their influence doesn't reach levels of the controlling exercise of tyranny.

The Responsibility of this Right is that We achieve this desperately needed goal, over "Dominion Corporatism", as Peacefully and as Fairly, as possible; in the understanding of the resistance to this of corporate capitalism.

It is not necessarily Our goal to destroy this worthy, but dangerous Human Economic Way of the Sacred Finite Quest For Prosperity, but to enable it, through careful, deliberate and vigilant principles, to serve More of The American People than it has heretofore done. Much More!

The Standards that We establish for the control of dynamic and dangerous, capitalism, are the first and most important ones that We can do as a flourishing Direct Democracy. Of course the control of capitalism would include the control of the international banking cartels, the military/industrial complexes and the corporations.

The Responsibility of this Right is that We make Ourselves Individually worthy of this, by the age of 18, in the working skills We need to use for the minimum work skills and performance requirements.

It is hoped that higher wages would develop from this minimum, with improvement in work skills and attendance performance"plus the duration of employment on one job. (A raise every year after three years on the job?) This could be said to be one of the American Rights Of Passage into Adulthood. Another being the right to serve and possibly risk Our Lives in Our Military Systems. Here too, Standards for Eligibility for Adult Wages have to be developed.

(24) The Right of all "Part-Time (at least one hour less than 40 hours per week) Workers" to a National minimum-minimum of $9.00 per hour and up to a maximum-minimum of $14.00 per hour"which is a Fairness response to Good Work. The Responsibilities of this Right is that We the Employees learn all We can and do Our Best Job.

The Responsibilities in this of Employers is that We recognize progress of young workers in becoming better workers and reward them accordingly. These principles would mostly apply as regards the Disabled Workers too.

Here again National Standards should be developed to guide Us in these working situations. We should Hope and try to eliminate the tendency among certain Employers to hold an Employees wages to $14.00 per hour, by letting them work only 39 hours per week. The next Right addresses this particular need for Fairness.

(25) The Right of an Entrepreneurial or corporate Employer, of a non-worker owned and operated business, to establish a "ceiling" on full-time hourly wages, once $30.00 per hour has been reached.

The Responsibility of this Right is to prevent inflationary pressure that comes from high wages. This to be utilized in conjunction with other anti-inflationary measures undertaken in Our New Economy. Ceilings prevent excesses. Unions should respect these ceilings. So should Landlords.