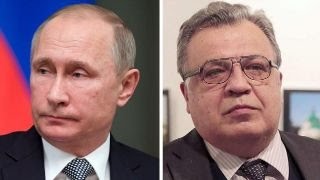 The video is as gruesome as it is surreal: A man in a black suit appears to be standing guard behind Russia's ambassador to Turkey, Andrei Karlov, for several minutes as Karlov addresses an art exhibition in Ankara. The man then steps forward, fires multiple shots into the ambassador's back and launches into an extended rant. "Don't forget Syria! Don't forget Aleppo," the assassin declares, referring to the Syrian city that has been the subject of intense fighting between Islamist rebels including Jabhat Fateh Al-Sham -- the Syrian franchise of Al Qaeda -- and the Syrian government, which has been bolstered by Russian airpower.

The shooter has been identified as 22-year-old Mevlut Mert Altintas, a Turkish police officer who has allegedly been on the force for two and a half years. He was killed after fulminating and pacing around the site of the killing uninterrupted for 15 minutes.

Was Altintas assigned to a security detail for the Russian ambassador, an obvious target after fierce protests led by extremists waving Al Qaeda flags surrounded the Russian consulate in Istanbul? How was this character hired by the police in the first place, and did he enjoy any relationship to the government of Erdogan, which has pumped immense amounts of weapons and funding to extremist rebel factions in Syria?

The Turkish government has attempted to pin the blame on its exiled arch adversary Fetullah Gulen, claiming that Altintas was a member of Gulen's FEPO cell. The mayor of Ankara, Melih Gokcek, has even suggested Altintas bellowed out Islamist slogans to implicate Erdogan's conservative, Islamist-oriented Justice and Development Party, or AKP. Gulen, for his part, is a fervent opponent of Turkey's support for Islamist rebels in Syria.

But Ahmet Yayla, a former high-ranking Turkish law enforcement official, told AlterNet it is the Erdogan administration that has filled Turkish law enforcement with extremist elements. Yayla would know about the internal affairs of Turkey's deep state; he served as chief of counter-terrorism in the Turkish National Police at the Turkey-Syria border city of Sanliurfa from 2010-2012 and chief of police until 2014, work that entailed identifying extremists attempting to cross the border into Turkey.

Related Topic(s): Police; Police Corruption; Rejep Tayyip Erdogan; Shooter; Turkey, Add Tags
Add to My Group(s)
Go To Commenting
The views expressed herein are the sole responsibility of the author and do not necessarily reflect those of this website or its editors.