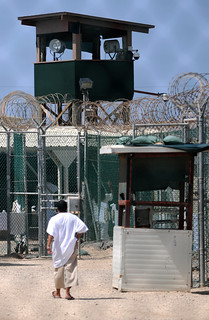 As everyone knows, "closing Guantanamo" was a centerpiece of the 2008 Obama campaign. In the Senate and then in the presidential campaign, Obama repeatedly and eloquently railed against the core, defining evil of Guantanamo: indefinite detention.

On the Senate floor, Obama passionately intoned in 2006: "As a parent, I can also imagine the terror I would feel if one of my family members were rounded up in the middle of the night and sent to Guantanamo without even getting one chance to ask why they were being held and being able to prove their innocence." During the 2008 campaign, he repeatedly denounced "the Bush Administration's attempt to create a legal black hole at Guantanamo."

In the seventh year of Obama's presidency, Guantanamo notoriously remains open, leaving one of his central vows unfulfilled. That, in turn, means that Democratic partisans have to scrounge around for excuses to justify this failure, to cast blame on someone other than the president, lest his legacy be besmirched. They long ago settled on the claim that blame (as always) lies not with Obama but with Congressional Republicans, who imposed a series of legal restrictions that impeded the camp's closing.

As I've documented many times over the last several years, that excuse, while true as far as it goes, does not remotely prove that Obama sought to fulfill his pledge. That's because Obama's plans never included an end to what he himself constantly described as the camp's defining evil: indefinite detention. To the contrary, he explicitly demanded the right to continue to imprison Guantanamo detainees without charges or trial -- exactly what made Guantanamo so evil in the first place -- based on the hideous new phrase "cannot be tried but too dangerous to release." Obama simply wanted to indefinitely imprison them somewhere else.

In other words, Obama never sought to close Guantanamo in any meaningful sense but rather wanted to relocate it to a less symbolically upsetting location, with its defining injustice fully intact and, worse, institutionalized domestically. In that regard, his Guantanamo shell game was vintage Obama: He wanted to make a pretty, self-flattering symbolic gesture to get credit for "change" (I have closed Guantanamo) while not merely continuing but actually strengthening the abusive power that made it so odious in the first place.

Related Topic(s): Guantanamo Prison; Obama Effect; Obama Torture, Add Tags
Add to My Group(s)
Go To Commenting
The views expressed herein are the sole responsibility of the author and do not necessarily reflect those of this website or its editors.