This election year changed my life. I realized that millions of people think as I do and are willing to fight for positions portrayed earlier as unrealistic.

It created in me a powerful bond with fellow Sanders supporters, mostly women: solidarity.

Throughout the primary, I was awed by his young supporters. Through their art and activism, they promoted him and issues of justice with more drive, energy and courage than I had at that age, and arguably have now. Uninformed they were not, committed they were. 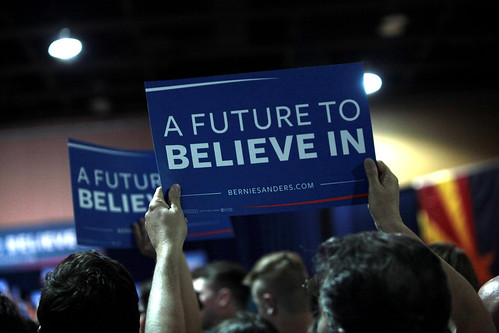 So too was I impressed with the activism of older women (and men) with a history of work against unjust and unproductive wars, for women's rights, for the environment, for affordable health care, and for human rights.

But the primary was trying. The media was heavily biased towards Clinton, providing extensive coverage of superficial announcements, even as it gave unwarranted time to Trump. The Democratic National Committee, under Clinton's 2008 campaign co-chair Debbie Wasserman Schultz, supported the recycling of big donor funds and pushed her nomination. Massive electoral irregularities quite possibly changed the outcome of the election. Sanders' supporters were silenced at the Convention. This is not "Russian meddling." It's proven fact.

The energy of these supporters will be critical to transforming America. The left recognizes this: Bernie has started "Our Revolution" and various movements have gained momentum, among them the fight for the human rights and dignity of black people, against the Dakota Access Pipeline, and against the TPP. In DC and around the world, people are standing up for economic, social, racial and environmental justice.

The energy of many Americans who did not support Clinton is sought in the general election. In fact, immediately after the primary, Sanders' supporters were told to vote for Clinton. The rationale offered was party unity and the platform. While that statement of policy positions was more progressive than anticipated, it still did not aggressively fight corporate power or support numerous positions of Sanders or movements. In place of listening-heavy communication -- with Sanders' supporters and others -- came reprimands.

Personally, though I have a great deal of admiration for Dr. Jill Stein, I plan to vote for Clinton in my maybe-maybe not swing state. It will hopefully be a quick exercise. I was a solid Sanders' supporter (although I'm to the left of him on international and some other issues, on which he would be center-right in many developed countries.)

I believe the work just to maintain the status quo will be challenging in the face of expanding and endless war, mass privatization and incarceration, increasing automation in a nation of weak social protections, growing inequality, and democracy-killing trade deals. The effort needed to reverse this situation -- the only sane thing to strive for -- is daunting. That's my primary concern.

Yet in a tightening presidential race, many Hillary supporters trying to reach out to Sanders' voters have virtually ignored our major concerns. Absolutely, she faces a xenophobic, misogynistic businessman with a history of losses and exploitation in business who supports brutal policies. But the vast majority of messages from Hillary supporters, on the media, and from many progressive groups has struck me as ineffective: lecturing has supplanted listening, and condescension communication. I really like many Clinton supporters and want to support her while amping up our arduous work for sustainability, justice and peace. But much of what I hear, and have heard has antagonized me and for long increased the odds I'd vote for Stein. (Thank you to my Facebook friends who may not have been in total agreement with me but provided the space for discussions on the subject.)

1. "Do you really want a President Trump?" The question, when posed to Sanders' supporters, is simply ludicrous. Sanders has been a more effective counterpoint to Trump. The Vermont Senator's messages of love and inclusion and ambition translated into policy, while Clinton's positions have arguably been closer to Trump's.

It has been insulting to imply those who advocate for affordable and universal health care to prevent suffering, for non-predatory college debt, for questioning our failed strategies of intervention, etc. -- for a political (and by extension economic, social and cultural) revolution -- are working for a Trump presidency. Insulting someone repeatedly wronged by a system that favored your candidate is a poor tactic, at best.

2. "You're throwing your vote away if you vote for Jill Stein/It's your responsibility to vote." No I'm not and no it's not. I am exhibiting my free will. Also implying it is Sanders' responsibility to deliver those who voted for him during the primary -- as if we're a package of bricks -- is inaccurate and unfair.

3. "You're so privileged; you're not thinking about anyone else. Things are going to be disastrous under President Trump." I'd argue the only way we have ended up with a system of extensive injustice -- and by implication, privilege -- is by many of the people who make such statements exercising their privilege and accepting a structurally biased and unjust system.

Veena Trehan is a DC-based journalist and activist. She has written for NPR, Reuters, Bloomberg News, and local papers.
Related Topic(s): Communication; Election; Hillary Clinton; Hillary Clinton Supporter; Sanders-Bernard; Solidarity, Add Tags
Add to My Group(s)
Go To Commenting
The views expressed herein are the sole responsibility of the author and do not necessarily reflect those of this website or its editors.