Click Here to Remove All Ads
David Bowie passed away after an eighteen month battle with cancer, at age 69. Bowie became a foundational member of art and culture, inspiring museum exhibits, fashion and memes, as well as making massive music hits. He was a true renaissance man who grew up from common roots.
The next to last video is a collection of interviews with Bowie in the late seventies and eighties.
The documentary on Bowie, at the end of this article, says Bowie's "key to survival was constant change."
This article collects some of his most loved hits including, from his new album, Lazarus, and Let's Dance, Heroes, Ziggy Stardust, 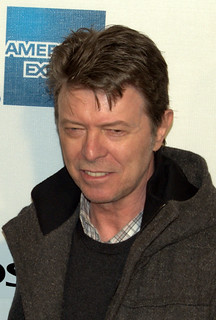 David Bowie by David Shankbone
(Image by david_shankbone)   Details   DMCA
Here's a youtube video of his song, Lazarus, from his new album, just released Friday, January 8th. Some of the lyrics include: "Look up here. I'm in heaven." "Look up here now, I'm in danger. I've got nothing less to lose." "Just like that Bluebird, I'll be free."

Starman "There's a star man waiting in the sky. He'd like to come and meet us but he thinks he'd blow our minds.

Chicago's Museum of Contemporary Art was one of a few museums around the world to host the David Bowie exhibit. I had a chance to attend. It was extraordinary.

DAVID BOWIE IS...IN A MUSEUM .David Bowie Is. is a new exhibit at the Museum of Contemporary Art in Chicago. Curator Michael Darling discusses its importance, what you'll see in the exhibit, ...
(Image by Consequence of Sound, Channel: RockItOutBlog)   Details   DMCA
Interviews with Bowie from the Late Seventies and the Eighties.

Related Topic(s): David Bowie; Music; Video Youtube, Add Tags
Add to My Group(s)
Go To Commenting
The views expressed herein are the sole responsibility of the author and do not necessarily reflect those of this website or its editors.