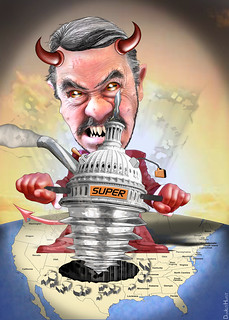 Tens of millions of people made New Year's resolutions last week, but few were as creative as the one pushed through Congress yesterday. Apparently, the new Congress decided that its first order of business should be to go after workers who are no longer able to hold jobs due to injury or illness.

It did this in a technical move that is likely to escape the attention of most of the public. The Republican Congress voted to ban any reallocation of Social Security tax revenue between the retirement fund, designated for retirees and survivors, and the disability fund for disabled workers. This matters because the disability fund is projected to face a shortfall some time in 2016. If no steps are taken by that point, workers suffering from cancer, heart disease or other disabling conditions will see their benefits cut by almost 20 percent.

The easiest way to have addressed this problem would be to simply reallocate money between the funds, as has been done 11 times in the past. But the Republican Congress apparently felt that it would be better to hold disabled workers hostage in order to extract concessions on this or other programs.

Just for a bit of orientation, the disability program is an insurance program that workers pay into. There are currently just under 9 million people getting disability benefits. The average benefit is $1,150 a month. It is financed by a tax of 1.8 percentage points of earnings, up to $118,500.

The projections had shown the program facing a long-term shortfall for some time, but its problems were moved forward by the Great Recession. As happens in every downturn, the number of workers collecting disability increased when the economy collapsed.

There are many workers who have various ailments that make it difficult for them to do their jobs. In good times their bosses may keep them on the payroll. But when economy turns down, a 60-year-old with a bad back or trouble walking is likely to be the first to lose a job.

By not paying workers the full disability benefits to which they are entitled, the government will not only be imposing a serious hardship on millions of workers and their families, it will effectively be defaulting on its obligations. It did after all collect payments from these workers, in most cases for several decades.

In recent years there has been a PR campaign to convince the public that the Social Security disability program is riddled with fraud. The facts say otherwise. Three quarters of applicants are turned down on their initial application, and even after appeals, 60 percent of applicants are denied benefits.

A recent study published by the University of Michigan examined a group of marginal disability applicants. These were people who could be approved or denied depending on the examiner to which they were assigned. This group comprised 23 percent of all applicants. The study found that two years after the decision on eligibility, an additional 28 percentage points of the people denied benefits were working compared to those who got benefits. After three years, this gap fell to just over 20.0 percentage points. Furthermore, the average wage of the people who worked was less than half of their wage before applying to disability.

These results indicate that even from this marginal group of applicants, the overwhelming majority would not be working even if denied benefits, indicating that they are suffering from serious health problems. If that is the case with marginal applicants, it is reasonable to assume that few among the 77 percent of non-marginal beneficiaries would be able to work.

This doesn't mean there is no fraud. Any program with 9 million beneficiaries will have some fraud. However the costs of the disability program are not being driven by fraud; they are being driven by workers who are no longer able to work.

While the easiest path to maintain full benefits would have been to reallocate some of the surplus from the Social Security retirement program, it would not be a huge lift to make up the shortfall with additional revenue. The cap on taxable wages could be raised above $118,500, which would make up some of the shortfall. Alternatively, an increase in the payroll tax of 0.2 percentage points on both workers and employers would fully close the gap.

While no one will want to pay higher taxes, a tax increase of this magnitude is not likely to pose a serious hardship. For a worker earning $40,000 a year it would mean an increase in taxes of $1.60 a week on both the worker and the employer. This tax increase is one-fifth the size of the increase that took effect in January of 2013.

It would have been best to have this discussion when the economy had more fully recovered and ideally wage growth had resumed. If wages were growing 1.0-1.5 percent a year, workers could still see higher pay even with a slight increase in taxes.

But even in the current economic context it is likely that many workers would be willing to face a 0.2 percentage point increase in the payroll tax in order to keep the disability insurance program intact.After all, they would be paying these taxes to ensure their own protection from disability. Also, unlike our representatives in Congress, most workers probably do not think it is funny to threaten terminal cancer patients with a 20 percent cut in benefits.

Dr. Dean Baker is a macroeconomist and Co-Director of the Center for Economic and Policy Research in Washington, D.C. He previously worked as a senior economist at the Economic Policy Institute and an assistant professor at Bucknell University. (more...)

Related Topic(s): Congress; Congress Republican GOP; Disabled; Jobs; Social Security Cuts, Add Tags
Add to My Group(s)
Go To Commenting
The views expressed herein are the sole responsibility of the author and do not necessarily reflect those of this website or its editors.