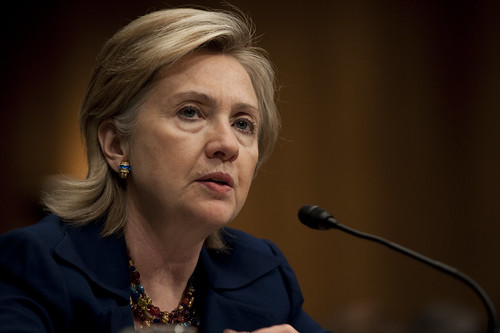 Democratic presidential candidate Hillary Clinton says she opposes the Trans-Pacific Partnership (TPP) but is having trouble convincing people to believe her. Imagine the trouble Hillary Clinton will have trying to build support for her effort to govern the country if TPP is ratified before her inauguration.

According to Politico's Wednesday Morning Trade, the Obama administration is launching a "TPP blitz" push to pass the Trans-Pacific Partnership (TPP)...

"Commerce Secretary Penny Pritzker last week said the administration is planning at least 30 trade events by the end of the month. That effort, similar to last year's 'all of Cabinet' push for trade promotion authority, is expected to shift to Capitol Hill in September when lawmakers return from their summer break."

In spite of the opposition of much of the public, both presidential candidates, all of labor, almost all Democrats, all progressive-aligned consumer, human rights, environmental and other organizations and even the Tea Party right, what is happening here is that Wall Street, the multinational corporations, most Republicans and unfortunately President Obama are preparing to insult democracy by pushing to ratify TPP. This undermines Clinton's credibility while campaigning for election, and if it passes it harms her ability to govern if she is elected.

There is something Clinton can do to bolster her credibility on the TPP. Clinton on Thursday is giving an economic speech near Detroit. This speech is an opportunity for Clinton to put this behind her for good. She should loudly call on President Obama to withdraw TPP now, and call on Democrats to vote against the TPP if he does not do that.

Progressive groups are asking her to do just that, calling people to sign a petition telling Clinton: "Lead against lame-duck vote on TPP."

Clinton has stated her opposition to TPP, but has not asked Democrats to join her in opposition, particularly during the "lame-duck" session of Congress that follows the election. This is one reason that Clinton continues to have a credibility problem on TPP.

Donald Trump repeatedly tells audiences that Clinton isn't really against TPP; she is just saying it for votes. He says she will "betray" us. This is Trump in his Monday "economy" speech in Detroit:

"The next betrayal will be the Trans-Pacific Partnership. Hillary Clinton's closest friend, Terry McAuliffe, confirmed what I have said on this from the beginning: If sent to the Oval Office, Hillary Clinton will enact the TPP. Guaranteed. Her donors will make sure of it."

Along with McAuliffe, who is the governor of Virginia, Chamber of Commerce President Tom Donohue has said she will reverse herself. And it was Clinton delegates who blocked putting specific TPP opposition in the Democratic platform. So yes, there is a credibility problem.

Dan Balz, writes about her problem at The Washington Post, in "Clinton has yet to respond to Trump's attack on globalism":

"Clinton came out against the agreement last year to put herself in alignment with Sen. Bernie Sanders ... But in doing so, she put herself at odds with the views enunciated by her husband, Bill Clinton, when he was president, and raised questions about whether her change of heart was mere political expedience.

Related Topic(s): Betrayal; Hillary Clinton; Obama And Tpp; Tpp Trans-pacific Partnership, Add Tags
Add to My Group(s)
Go To Commenting
The views expressed herein are the sole responsibility of the author and do not necessarily reflect those of this website or its editors.