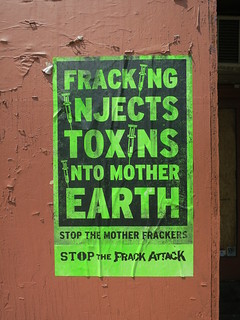 Vera Scroggins of Susquehanna County, Pa., was found to be in contempt of court, Thursday, and fined $1,000.

Her offense? She tells the truth.

Truth is something that apparently has bypassed the court of Judge Kenneth W. Seamans, who retired at the end of 2014, but came out of retirement to handle this case.

Scroggins, a retired real estate agent and nurse's aide, was in Common Pleas Court to explain why a temporary injunction should not be issued against her. That injunction would require her to stay at least 150 feet from all properties where Cabot Oil and Gas had leased mineral rights, even if that distance was on public property. Because Cabot had leased mineral rights to 40 percent of Susquehanna County, about 300 square miles, almost any place Scroggins wanted to be was a place she was not allowed to be, even if the owner of the surface rights granted her permission.

Before Judge Seamans were three corporate lawyers, a lawyer from the county, and several Cabot employees who accused Scroggins of trespassing and causing irreparable harm to the company that had almost $1 billion in revenue the previous year.

Since 2009, Scroggins has led Pennsylvania and New York residents, celebrities, government officials, and journalists on tours of the gas fields. She often had friendly discussions with the workers--and when management asked her to leave, she did. She has posted more than 500 YouTube videos of fracking operations, documenting what fracking is, what it does, and how there may be unsafe practices. The state DEP has even used her documentation as part of the evidence necessary to cite and then fine gas drillers.

Scroggins asked the judge for a continuance because she had only received the summons three days earlier, on a Friday, and couldn't get legal representation by Monday.

Seamans told her he wouldn't grant a continuance because she didn't give the court 24 hours notice. "He said that to grant a continuance would inconvenience three of the lawyers who had come from Pittsburgh [about 250 miles to the southwest], and I might have to pay their fees if the hearing was delayed," says Scroggins.

By March 2014, Cabot and Scroggins were back in court for a hearing to modify Seamans' original temporary injunction. This time, Cabot wanted the buffer zone extended to 500 feet, but couldn't show any reason why 500 feet was necessary. Unlike her first appearance when she didn't have legal representation, she now had Public Citizen, the Pennsylvania ACLU, and local attorney Gerald Kinchy, represent her when she sought to vacate the order.

The revised order prohibited Scroggins from going within 100 feet of any active well pad or access roads of properties Cabot owns or has leased mineral rights, even if on public property.

Related Topic(s): Court Order; Fracking; Oil; Oil; Truth, Add Tags
Add to My Group(s)
Go To Commenting
The views expressed herein are the sole responsibility of the author and do not necessarily reflect those of this website or its editors.