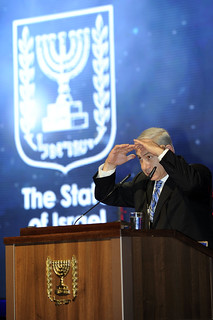 Benjamin Netanyahu -- where is my government?
(Image by Masa__Israel)   Details   DMCA
>

IT IS a rather disgusting spectacle.

The Israeli Right has won a crushing election victory. (On closer examination, the victory was not quite so crushing. Indeed, there was no victory at all. The crushing victory of Likud was achieved only at the expense of other rightist parties.)

The Rightist bloc together has not advanced at all. To form a majority coalition, it needs the party of Moshe Kahlon, the majority of whose voters are more leftist than rightist. Kahlon could easily have been persuaded to join a leftist coalition, if the leader of the Labor Party, Yitzhak Herzog, had been a more resolute personality.

Be that as it may, Binyamin Netanyahu is now busy trying to construct his government.

That's where the disgust comes in.

A FIGHT is going on. A fight of all against all. A fight without rules or limits.

Everyone wants to be a minister. Everybody in Likud and the other prospective coalition parties. Politicians galore.

There are several classes of ministries. At the top there are the Big Three -- Defense, Treasury and Foreign Affairs. Defense is generally admired ("Our brave soldiers") and gets a huge share of the state budget. Everybody and his wife (as you say in Hebrew slang) wants to be Minister of Defense.

Defense officials despise Foreign Office officials, as does the entire country. The cocktail-sippers are not real he-men (nor she-women). Yet the post of Foreign Minister is hotly desirable. He or she travels around all the time, represents the state, is photographed with the world's great. Also, last but not least, a Foreign Minister cannot fail. If foreign relations go wrong, nobody accuses the Foreign Minister. If anyone at all, it's the Prime Minister who gets the blame.

ON THE morrow of an election, when the dust of battle clears, many dozens of politicians cast their eyes on the few ministries.

Each one of the leading candidates of the prospective coalition parties starts to send longing looks at the still empty chairs. One of the Big Three? If not, some of the desirable medium ministries? If not, at least one of the minor ones? Or at least Deputy Minister? The mouth waters.

Trouble is, Israeli law prescribes that the government can consist of no more than 18 ministries. No "ministers without portfolio." The number of deputy ministers is also severely restricted.

Who would pass such a stupid law? I think it was Yair Lapid who, in a moment of hubris, caused the law to be passed. It is, of course, vastly popular. It saves money. Each minister, even without a portfolio, is entitled to a minimal staff, an office, a car and a chauffeur. Compared to the price of a single fighter plane, that is nothing. But for the general public it is a symbol of wastefulness. So we have this law.

How do you fit 40 aspiring politicians into 18 ministries? You don't. Either you change the law, as many now demand, or you turn away many very angry politicians, at your own risk.

Related Topic(s): Benjamin Netanyahu; Far-right; Israel, Add Tags
Add to My Group(s)
Go To Commenting
The views expressed herein are the sole responsibility of the author and do not necessarily reflect those of this website or its editors.