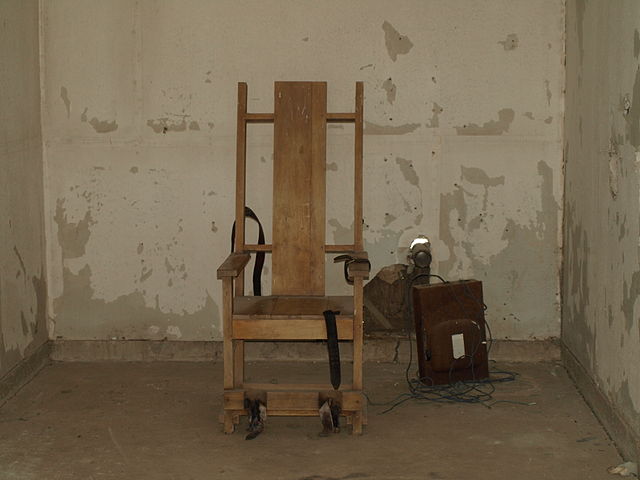 The Hill reports that capital punishment is fading away in America. Government employees have ceremonially killed fewer prisoners this year (20) than in any year since 1991, and fewer criminals (30) have been sentenced to death than in any year since the option became available again in 1976 (after a US Supreme Court ruling resulted in a four-year national moratorium).

There seem to be several reasons for the precipitous decline, ranging from difficulty getting the drugs used in executions (manufacturers and pharmacies don't like the stigma) to increased court scrutiny of sentencing. Whatever the reasons, it's good news. Capital punishment should be brought to a speedy and permanent end in the United States.

I'm not saying that there aren't crimes worthy of death. In fact, I heartily support the killing of violent criminals in defense of self or others at the scene of the crime.

But once a criminal has been apprehended, disarmed and caged, killing him or her isn't self-defense any more. Execution is just the gratuitous, vengeful taking of a human life for public show. And no matter how much lipstick the practice's supporters put on the pig to try and turn it into something else, that's all it will ever be.

Capital punishment is also completely incompatible with the notions of "limited government" that most libertarians and some conservatives claim to support, not to mention the basic civil liberties that both libertarians and liberals publicly sustain. If the state can decide with impunity that someone needs to die and then kill that person in cold blood, what CAN'T the state do?

This would be true even absent the growing number of death row inmate exonerated by new evidence. Who knows how many innocents have been sacrificed to Moloch before the mistake could be discovered and corrected?

Capital punishment seems to be going away, but it can't go away fast enough. Even as the Libertarian and Democratic Parties finally added opposition to the death penalty to their platforms this year, majorities in California, Nebraska and Oklahoma voted, to their shame, to retain the barbaric practice.

The US is part of a shrinking club of evil, a club composed mostly of favorite holiday destinations like North Korea and Saudi Arabia. Guinea, Mongolia and Nauru became the latest three nations to abolish it in 2016.

Surely we're better than this. In 2017, let's show it by finally and forever ceasing the evil practice of capital punishment.

Related Topic(s): Capital Punishment, Add Tags
Add to My Group(s)
Go To Commenting
The views expressed herein are the sole responsibility of the author and do not necessarily reflect those of this website or its editors.