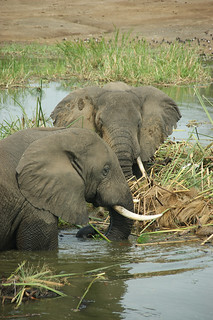 Would you like to go to Zimbabwe, kill and behead a lion, just like that dentist from Minnesota or the physician from Pittsburgh recently did? They paid about $50,000 each for that experience.

How about a black rhino, an endangered species? A professional hunter from Dallas, Texas, won a $350,000 lottery to stalk and kill that animal in southern Namibia. In the 1950s, there were about 70,000 black rhinos. There are now fewer than 2,400, most of them killed off by the human predators.

If giraffes are your thing, you can go to South Africa and, like a woman from Idaho, kill the world's tallest animal, pose with it, and post it onto your Facebook page.

But, let's say your anemic bank account can't provide you with the funds for a two-week safari, because that rebel flag you just bought to mount on your broken-down pick-up cost too much.

For a few thousand dollars, Great White Hunters--complete with rented guides, dogs, and guns or bows--can go into a fenced-in area and shoot an exotic species. In most canned hunts, the animals have been bred to be killed, have little fear of humans, and are often lured to a feeding station or herded toward the hunter to allow a close-range kill. In some of the preserves, animals are drugged or tied to stakes. Some of the "big cats," recorded in investigative undercover videos by the U.S. Fish and Wildlife Service and the Fund for Animals were declawed, placed in cages, and then released; the terrified and non-aggressive animals were then killed within a few yards of their prisons; some were killed while in their cages.

For less than $3,000 you can go to Snyder County, Pa., and kill an elk, a deer, or a wild boar. You don't even need a hunting license or worry about hunting out of season. The animals are fenced in on a private preserve.

The club recently placed full-page ads in local newspapers, and promises that for your $1,000 to $3,000 thrill, you get a guaranteed success, lodging, meals, and even a color photo of you and what is euphemistically known as a trophy.

If pheasants are your thing, you can head out to the Rolling Rock Club in Ligonier, Pa. This is where Dick Cheney and some of his shooting buddies stood and killed more than 400 just-released birds, which they blasted onto their dinner plates for a lead-scented meal. In the afternoon, having hardly raised a bead of sweat, the good ole boys slaughtered dozens of equally tame mallards that had been hand-raised and shoved in front of waiting shotguns for the massacre. By the time Cheney flew out of the area, the mallards were plucked and vacuum-packed, ready for flight aboard the taxpayer-funded Air Force 2.

The pheasant hunt was a year after the Mighty Dick sent shotgun pellets into the face of a 78-year-old hunting companion, whom he thought was a quail.

Prefer pigeons? Although they're not a "canned hunt," there are still a half-dozen target shoots in southeastern Pennsylvania, where club officials release the birds within 20 yards of contestants, making a kill even easier than hitting metal ducks at a carnival's shooting gallery. You can't even eat the pigeons--by the time you pick the shotgun pellets from the bird, there's no meat left.

Many of the animals on canned hunts are surplus animals bought from dealers who buy cast-off animals from zoos and circuses; the animals sold to the preserves are often aged and arthritic. Dozens of preserves have bought black bears, zebras, giraffes, lions, boars, and just about any species of animal the client could want, solely to be killed, photographed, and then skinned, stuffed, and mounted.

Most "kills" on the "farms" are from animals bleeding out. Animals suffer from minutes to hours, says Heidi Prescott, senior vice-president of the Humane Society of the United States. Canned hunting, says Prescott, "is about as sporting as shooting a puppy in pet store window." Most sportsmen agree with her.

Related Topic(s): Africa; Animals; Hunters; Pennsylvania; Shooting; Weapons, Add Tags
Add to My Group(s)
Go To Commenting
The views expressed herein are the sole responsibility of the author and do not necessarily reflect those of this website or its editors.