Can't Warren read the "Dubyas" on Hillary's wall? Like, say, waging war, warming the planet, coddling Wall Street, and sabotaging Warren? If Warren, full knowing Hillary's history and donors, can't play rational prophet and read the sinister wall message Hillary's moving middle finger is tracing, a united movement of activists must soon jump in and read it for her. As if reading her the riot act. For Hillary's message board is so cluttered with "Dubyas," she seems a virtual disciple of Georgie Boy himself. 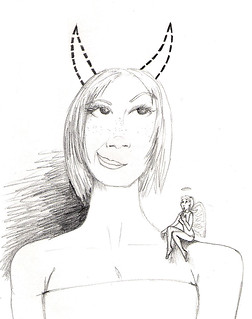 Angel Klein to Warren: 'Looks like Hillary's got inside your head.'
(Image by JenXer)   Details   DMCA

A house divided against itself cannot stand. Especially if that house is a Democratic Party whose populist, climate-saving voice is Liz Warren but whose president-elect is Hillary Clinton. Something's got to give, and I strongly urge bringing the "mother of all catfights" to a head before the fiasco of a Clinton presidency. For the fur eventually has to fly, and if it flies too late, the ones who'll be harmed most gravely--like cat-allergy sufferers in anaphylactic shock--will be We the American People.

Except, of course, for those innocent foreign civilians murdered by Hillary's inevitable wars. But sorry, I slipped up. As good, exceptional Americans, we're not supposed to care, let alone think, about them.

But can't we at least care about the enormous diversion Commander-in-Chief Hillary's wars will create? Like diverting vast resources from badly needed domestic jobs and infrastructure programs, like retooling our energy infrastructure to meet the emergency of runaway climate change. You know, the programs Warren supposedly deeply cares about.

Or what about that other enormous diversion--diverting our attention from Hillary's utter failure to embrace and enact Warren's populist, climate-saving agenda? Wars have that effect, you know. Given the faintest suspicion of a terrorist incident--and who, at this put, would put it beyond our government to create one?--Hillary will screech her raucous war cries as loudly as any Dubya-era neocon. And, in fact, she'll echoed by those very same neocons--who should be rotting in prison for war crimes--as our chickenhawk mainstream press beats its eternal war drum. To the exclusion of pertinent but dismal domestic news.

Perhaps readers find applying "chickenhawk" to our mainstream press misplaced: doesn't it usually designate Congresspersons or neocon cabinet members bellowing for wars that only fill their wallets, wars they and their kinfolk will never fight? Well, yes, and "the usual suspects" certainly deserve every scintilla of derision "chickenhawk" implies. But we forget at our peril how dismally our "presstitute" talking heads fail to show a courage they squawk for in our troops. For by exercising courage in their own theater of war--fighting government's deceitful propaganda--they could save tens of thousands more lives than the doughiest Green Beret.

And our press could save millions of lives, and perhaps save human civilization itself from climate apocalypse, if they showed the least bit of courage in challenging Elizabeth Warren. Challenging her specifically about her support for Wall Street, "War Street," and Gas & Oil tool Hillary Clinton. Where "presstitutes" won't go, brave, united activists must not fear to tread.

Now, Warren's support for Clinton is something of an enigma. It would be no enigma at all if Warren weren't so transparently, by her modest origins and firebrand rhetoric, Main Street's friend and Wall Street's bitter foe. And what sharply deepens that enigma is Warren's ever-more-promising stance on behalf of the climate. Not only has Warren publicly identified fossil-fuel interests as part of the policy-corrupting plutocrats we need to fight, but she recently promoted by e-mail a teleconference featuring climate activists' "patron saint" Naomi Klein denouncing the climate dangers of the TPP. Liz Warren and Naomi Klein!--what duo could sing sweeter music to climate activists' ears? For Klein has forcefully argued that any effective climate action must come through government, and here at last is not just any U.S. senator--but America's foremost progressive incumbent--collaborating closely with Klein and endorsing her activity. Were it not for a certain Hillary, we might almost read it as a sign of the Second Coming. Or perhaps, addressing a different constituency, as the dawning of the Age of Aquarius.

But instead, recalling Warren's unrepented public support for Hillary Clinton, we're inclined to picture a rather different "Second Coming," as unforgettably portrayed by William Butler Yeats in his great poem of that title:

The blood-dimmed tide is loosed, and everywhere

The ceremony of innocence is drowned

It's as if Klein and Clinton were Warren's good and bad angels of the cartoon cliche, each straddling a shoulder and whispering incompatible, soul-ripping shreds of advice in her ears. Yet Warren goes on, speaking the words of an angelic child and supporting demonic Hillary, as if it made no difference whatever to the fate of her soul. Knowing our common stake in Warren's "salvation," we need to alert her it makes plenty. She can't go on serving God and Mammon's favorite devil, no matter how many plutocrat dollars that devil rakes in for Democrats. It's time to make Warren read the "Dubyas" on the wall.

Today's Democratic Party faces an urgent crisis, one that simply can't be settled by compromising for sake of party unity. The plutocrats, militarists, and climate destroyers already own a party--the Republicans--and there's plenty of room for Hillary and her donors there. It's not merely as if Warren and Clinton are matter and anti-matter, incompatible to the point of mutual annihilation if confined to the same space; it's actually worse. If Hillary Clinton becomes president, plutocrats' agenda simply wins, for Clinton will have every means--not just distracting wars--for sabotaging Warren's program. For example, does anyone think for one second Clinton will actively stump for "Warren wing" Congressional candidates, providing the electoral coattails needed to enact Warren's populist agenda? Hillary's plutocrat donors would undoubtedly clamp shut their spigots of cash if she did. A Clinton presidency would likely mean a Congress dominated by Republicans and "Blue Dog" Democrats--the ideal monkey wrench for sabotaging Warren. Only Warren herself--or a Warren-wing candidate strongly endorsed by Warren--can produce populist electoral coattails, paving the way for Warren's urgent reforms.

Related Topic(s): Climate; Commander-in-chief; Congress; Crisis; Democratic; Donors; Dubya Related; Energy; Government; Plutocracy; (more...) President; Republican; Warren-Elizabeth, Add Tags  (less...)
Add to My Group(s)
Go To Commenting
The views expressed herein are the sole responsibility of the author and do not necessarily reflect those of this website or its editors.