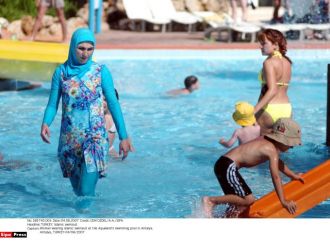 In France a woman is publicly humiliated when police force her to remove her burkini while she is at the beach. In another incident an Australian woman is made to leave a French Riviera beach because she is wearing a burkini.

Stories like these abound. But France's burkini ban, a headliner for months now, is really nothing new. Nor is it confined to beaches in France.

As a blogger on Women's Media Center posted, "the insidious concept that women's clothing can and should be chosen and regulated for them is a continuing issue." The blogger, identified only as Chloe H., pointed out that the bikini was also criticized when it appeared seventy years ago. In 1950s Italy the scant swimsuit was actually banned for a time while in the US one-piece swimsuits were banned in the early 1900s. Swimsuits with skirts also took a hit, with the Washington Post claiming in 1907 that they "endangered the morals of children" and should be stopped by the police.

Soon after that period in our history the post-WWI flappers came along. They were condemned for clothing changes designed for comfort and ease of movement. Girls were said to have "parked" their corsets in order to dance. Coco Chanel had women bind their breasts with strips of cloth for that "garconne" (little boy) look, while waistlines dropped and hems rose, to the chagrin of the patriarchs.

The point is, men (still the majority of designers) have been telling women how to dress, how to cover or expose themselves, how to be demure or deadly, for a very long time, and women have had enough. "It is sexist and patronizing," says Chloe H. "Women should be able to express themselves through their attire jut as freely as men."

For Muslim women, that expression can mean embracing the idea of being fully covered, even at the beach. For that reason, Aheda Zanetti created the burkini in 2004 "to give women freedom," as she put it to the Guardian. Adds the Brooklyn-based Muslim designer Nailah Lymus, "Covering identifies us, but it doesn't define us."

The issue isn't only germane to Europe and the US. A recent New York Times story featured "an Islamic Fashion Revolution" in Turkey in which modest dress is enlivened by color and creative design. According to a Muslim fashion blogger in London who attended Istanbul Modest Fashion Week, "there are a lot of Muslim girls who wear the hijab and we like fashion."

But while modest Muslim dress might be blossoming in Turkey, things are not so bright in Egypt. According to Heba Habib, writing in the Washington Post, two women who were enjoying a pool swim at a Red Sea resort recently were told to leave the pool because they were wearing burkinis, known in the Arab world as "Islamic swimwear." The manager went so far as to have a group of male employees get into the pool in their underwear to mock the women, then ordered workers to contaminate the water with chlorine and nitric acid.

Elayne Clift is a writer,lecturer, workshop leader and activist. She is senior correspondent for Women's Feature Service, columnist for the Keene (NH) Sentinel and Brattleboro (VT) Commons and a contributor to various publications internationally. (more...)
Related Topic(s): Clothing; Culture; Dress; Fashion; Patriarchy; Women, Add Tags
Add to My Group(s)
Go To Commenting
The views expressed herein are the sole responsibility of the author and do not necessarily reflect those of this website or its editors.