Why, after 16 years, is the media taking election fraud concerns seriously?

For the past 16 years, concerns about election fraud have either been completely ignored or shoved aside as conspiracy nuttery. Volusia County's negative votes awarded to Al Gore were simply an "error". The stolen 2004 Ohio election was quickly dismissed, and the media never reported on the statistical proofs or evidence of tabulation fraud. Concerns about insecure electronic voting systems received sparse coverage. Even as late as June 2016, the NYTimes ran a blatantly false article purporting to debunk the obvious fraud in the Democratic primaries. And I don't recall EJUSA's comprehensive 100-page report on that fraud in July even getting mentioned.

The media has never been on the side of election integrity. So when they suddenly give credence to the idea of a recount, that should raise eyebrows. Instead, the election integrity community, which has often railed against the media, is rushing headfirst into a recount effort being taken up by Jill Stein. 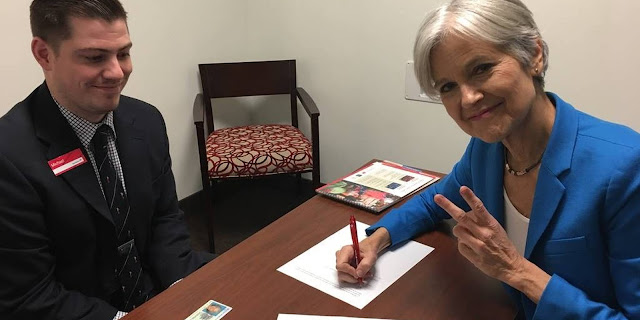 I don't trust the media's motives at all. How did their agenda change from covering up election fraud to supporting an effort that risks exposing it? Somehow, the media's corporate owners intend for the recount to benefit their own agenda. And that should be concerning to all of us.

To understand the recount, we need to know what kind of fraud went on in the general election. Almost everyone agrees it was fraudulent, but the direction of the rig is controversial and surprising.

It was pretty clear that the Democratic primaries were stolen from Bernie. So naturally, most progressives and alt-righters expected a repeat of Hillary's installation during the general: massive election fraud against Trump to ensure she won. This was the logical conclusion to make, given Hillary's support from the establishment and her past record of stolen elections. Some of us, myself included, essentially believed November 8 was a foregone conclusion - she'd win no matter what.

Well, it didn't turn out that way. Donald Trump pulled off a shock victory. The initial assumption was that Trump was strong enough to overcome Hillary's fraud. But exit poll analysis found the opposite. In nearly every state, Hillary did much better in exit polls than vote counts. In some states, this red shift was enough to reverse the winner.

The exit polls led to a schism in the election integrity community. Most election integrity analysts were inclined to trust them, but Richard Charnin believed they were falsified to obscure fraud for Hillary. In his theory, the pollsters made it look like Hillary was the denied winner to trick election integrity researchers. Certainly possible, but the assertion needs evidence, and Charnin's case was flawed. Still, a lot of people have hung on his words.

Beyond Charnin's failure to show the exit polls were wrong, there's more reason to believe a "Trump shift" is legitimate:

There's a good case for fraud in Trump's favor. But that still seemingly defies common sense. It makes no sense for the establishment to rig the election against Hillary, the favorite of the corporate elite and deep state. Especially when they already rigged the Democratic primaries for her.

Hillary and the DNC clearly didn't expect to lose either. They were supremely overconfident throughout the campaign. Democrats were so assured of a landslide that they treated the presidency and Senate as a given, wondering whether they might retake the House. And if there was even a chance that Hillary might suffer from fraud, why would she insist that challenging elections was dangerous to democracy? These maneuvers only make sense if you know your victory is assured.

All of this hints at an interesting conclusion: the election was rigged in Trump's favor, but that wasn't how the establishment initially planned it. They originally intended to rig the election for Hillary, which explains the Democrats' hubris. Something, however, changed very late, and Trump was installed in her place.

This last minute change of plans is supported by suspicious Clinton campaign behavior before and on election night:

Early on November 8, the Clinton campaign cancelled a fireworks celebration in New York. Why would they call it off at the last minute, unless they learned that the expected landslide wasn't happening after all? If someone told them the fix was off, it could provoke that response.

A writer about important issues

Related Topic(s): Democratic; Democrats; Establishment; Media; Polls; Putin; Recount; Red-baiting, Add Tags
Add to My Group(s)
Go To Commenting
The views expressed herein are the sole responsibility of the author and do not necessarily reflect those of this website or its editors.

Calls For a Recount Don't Add Up