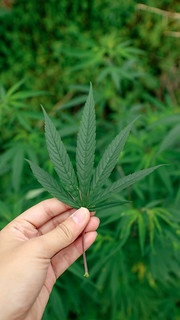 Mike Hopkins had reservations. "Right now, nothing in the state house...is going to get us home legally, so some action by the federal government would be most welcome," said Hopkins, who represents one of at least 17 Georgia families that have moved to Colorado to access cannabidiol oil (CBD).

The new law allows registered patients and their caregivers to possess up to 20 fluid ounces of CBD oil, but they will have to get it somewhere outside of Georgia and commit a federal felony by bringing it home. It doesn't matter that CBD oil won't cause a person to "get high".

It says anyone "who manufactures, distributes, dispenses, sells, or possesses with the intent to distribute the oil shall be guilty of a felony" punishable by up to 10 years in prison.

A few days before the Governor's photo op, a news story highlighted Georgia families who are willing to break federal law to get the recently legalized drug. When a reporter asked a Drug Enforcement Agency (DEA) official whether patients complying with the Georgia law will be arrested when crossing state lines or detained at airports by TSA employees, the agent responded "I'm not going to get in the hypotheticals".

Why should patients and their families be at risk?

The same week, Tennessee lawmakers also made a symbolic change to their law regarding medical marijuana. . The compassion was unanimous, with the Senate voting 26-0 to pass the bill, and the House voting 95-0. Unfortunately, the change will have little impact on the well-being of many patients who depend on cannabis for control of their symptoms.

According to Tennessee's bill, "The cannabis oil must have been obtained legally in the United States and outside of this state, [and] the person must retain proof of the legal order or recommendation from the issuing state".

This wording highlights the problem. How can the oil be "obtained legally in the United States" when federal law makes it impossible?

The federal government can punish patients who use the oil because cannabis is a Schedule 1 drug according to the DEA. The DEA has obstinately refused to reschedule cannabis into the less restrictive Schedule 2 category, and courts have deferred to them.

That's why new federal legislation is needed to move cannabis into Schedule 2.

Although Schedule 2 drugs have a "high potential for abuse", they have an accepted medical application and are much easier to obtain for purposes of important academic research. Moving cannabis to Schedule 2 keeps cannabis as a controlled substance, keeping recreational use illegal under federal law.

The CARERS Act would allow patients, doctors and businesses in states that have already passed medical marijuana laws to participate in those programs without fear of federal prosecution.

The Act does 5 things:

It removes cannabidiol from the federal definition of marijuana.

Dr. Hine is a Tennessee physician who focuses on health promotion and wellness. His hobbies include producing video documentaries, producing a perfect spinach egg omelet, community volunteering and running with his golden retriever and chocolate (more...)
Related Topic(s): Marijuana; Patients; Patients; State, Add Tags
Add to My Group(s)
Go To Commenting
The views expressed herein are the sole responsibility of the author and do not necessarily reflect those of this website or its editors.

Why is Bernie Sanders popular?

Let's send our kids the right message about marijuana.

Civil marriage for none. Civil unions for all.