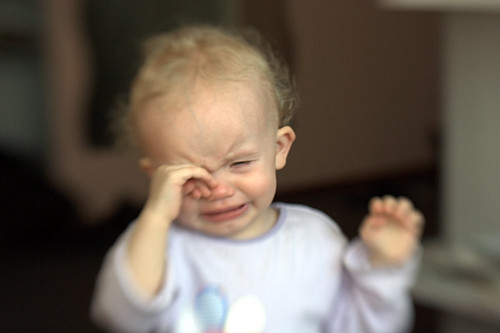 Sleepy crying baby
(Image by _Nezemnaya_)   Details   DMCA
There was nothing like getting up on a crisp Autumn morning, putting on a perfectly worn flannel shirt and cut-off blue jean shorts, downing some carne guisada breakfast tacos and coffee, strapping on a nail bag and hammer -- driving nails and watching the frame of a new home rise against a Sierra Madre reflected lapiz and sailing meringue South Texas sky...

Texas has typically been a place of rugged individualists and entrepreneurs: makers. If you listen to the pathetic Right-bound drivel rising from this place now -- you'd think we're all a bunch of illiterate, unseasoned, callow, cry babies.

Mexicans are stealing our jobs and threatening our women. Muslims are stealing our sleep. Women are mean to us -- we must either run from snapping, unshackled uteruses or legislate them into, safe, controlled domesticity. We must either hide in our houses or strap on guns to protect ourselves from all the things that go bump in the night. We've had to even turn Jesus into a warrior to protect us from one or another big bad Puddy Tat. Give me a stinkin' break!

Big brawny grown men run around hollaring or sit in bars and drunkenly and proudly, with all the theatrical machismo they can muster, spout the list of the million ridiculous things they are afraid of. Hey Dude -- how about being a real man -- go make something!

No, this ain't the Texas I grew up in. As kids we were surrounded by iconoclasts, builders, pioneer individualists, creators, poets. I was always attracted to the rough poets. The fellows that worked with their hands and their words. Possibly the best that ever lived was Guy Clark. He built guitars. He built songs.

He passed away this past May. He left a legacy that will run on indefinitely. He wrote a song,"Building Boats" that I think encapsulates the spirit of the Texas that used to be -- "Let's go make somethin', there's still some daylight left!"

It's fascinating that the three most iconic, recent Texas political figures are all women:Ann Richards, Liz Carpenter and Molly Ivins. While the boys were cryin' -- the girls were workin'.

Now don't that beat all.

Related Topic(s): Conservative Republican; Molly Ivins; Poets; Texas; Work, Add Tags
Add to My Group(s)
Go To Commenting
The views expressed herein are the sole responsibility of the author and do not necessarily reflect those of this website or its editors.