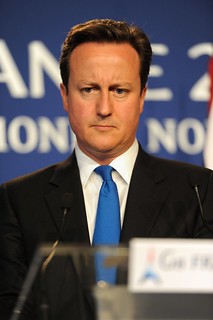 Jeremy Corbyn, leader of the British Labour Party, is a man of genuine integrity and honesty in his opposition to British bombing of Syria.

Indeed, he is everything the Prime Minister of Britain, David Cameron, is not.

I think we see from the storm in the British press against Corbyn just how much the establishment values integrity and honesty, which is to say, not at all.

Almost every word of Cameron's on the subject of bombing is deliberately deceptive.

He is in fact an intimate part of "the club" which privately regards ISIS and other murdering rogues as tools to an end, and that end is to destroy Assad and turn Syria into a rump state. The club's members always falsely describe the situation in Syria as a civil war rather than what it truly is, an invasion of a peaceful land by the creatures of outside powers.

They freely admit ISIS is horrible, innumerable propaganda videos having established the fact for the public, but they make no move to do something genuine about it. They portray the only man who is doing something to help Syria's brave army, Vladimir Putin, as some kind of evil figure with dreams of empire. There is a stream of propaganda and lies about everything Russia does, from its cruise missiles hitting Iran to its planes bombing hospitals, all offered with zero evidence.

Cameron's every word on Syria is inappropriate. A British Prime Minister has no business pronouncing on the legitimacy of this or that government, especially one supported by the majority of the country's people, clans, and armed forces. Cameron himself, posing as some cheap knock-off defender of democracy, positively Churchillian in his own eyes, enjoys the support of about 35% of British voters.

John Chuckman is former chief economist for a large Canadian oil company. He has many interests and is a lifelong student of history. He writes with a passionate desire for honesty, the rule of reason, and concern for human decency. John regards (more...)

Related Topic(s): Invasion, Add Tags
Add to My Group(s)
Go To Commenting
The views expressed herein are the sole responsibility of the author and do not necessarily reflect those of this website or its editors.

A Strange, Soulless Man and His Failed Presidency

Understanding Modern Israel: Why It Is Driving the World Towards Madness

What America Has Become