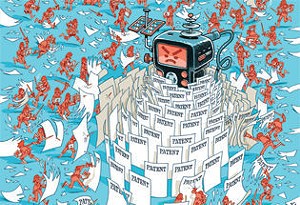 Pundits have declared a "New Cold War." If only! The Cold War was a time when leaders focused on reducing tensions between nuclear powers. What we have today is much more dangerous: Washington's reckless and irresponsible aggression toward the other major nuclear powers, Russia and China.

During my lifetime American presidents worked to defuse tensions with Russia. President John F. Kennedy worked with Khrushchev to defuse the Cuban Missile Crisis. President Richard Nixon negotiated SALT I and the anti-ballistic missile treaty, and Nixon opened to Communist China. President Carter negotiated SALT II. Reagan worked with Soviet leader Gorbachev and ended the Cold War. The Berlin Wall came down. Gorbachev was promised that in exchange for the Soviet Union's agreement to the reunification of Germany, NATO would not move one inch to the East.

Peace was at hand. And then the neoconservatives, rehabilitated by the Israeli influence in the American press, went to work to destroy the peace that Reagan and Gorbachev had achieved. It was a short-lasting peace. Peace is costly to the profits of the military/security complex. Washington's gigantic military and security interests are far more powerful than the peace lobby.

Since the advent of the criminal Clinton regime, every American president has worked overtime to raise tensions with Russia and China.

China is confronted with the crazed and criminal Obama regime's declaration of the "pivot to Asia" and the prospect of the US Navy controlling the sea lanes that provision China.

Russia is even more dangerously threatened with US nuclear missile bases on her border and with US and NATO military bases stretching from the Baltics to the Black Sea.

Russia is also threatened with endless provocations and with demonization that is clearly intended to prepare Western peoples for war against "the Russian threat." Extreme and hostile words stream from the mouth of the Democratic presidential candidate, Hillary Clinton, who has called the president of Russia "the new Hitler" and threatened Russia with military force. Insouciant Americans are capable of electing this warmonger who would bring Armageddon upon the earth.

Yesterday, Israel's voice in the US, the New York Times, added to Hillary's demonization of the most responsible leader in the world with this editorial: "Vladimir Putin's Outlaw State." This irresponsible and propagandistic editorial, no doubt written by the neoconservatives, blames all the troubles in Ukraine and Syria on Putin. The NYT presstitutes know that they have no case, so they drag in the US-orchestrated false report on MH-17 recently released by Washington's Netherlands vassal.

This report is so absurd as to cast doubt on whether intelligence exists anywhere in the Western world. Russia and the now independent Russian provinces that have separated from Ukraine have no interest whatsoever in shooting down a Malaysian airliner. But despite this fact, Russia, according to the orchesrated report, sent a surface-to-air missile, useful only at high altitude, an altitude far higher than the Ukrainian planes fly that are attacking Russians in the separated republics, to the "rebels" so that the "rebels" could shoot down a Malaysian airliner. Then the missile system was sent back to Russia.

How insouciant does a person have to be to believe this propaganda from the New York Times?

Does the New York Times write this nonsense because it is bankrupt and lives on CIA subsidies?

It is obvious that the Malaysian airliner was destroyed for the purpose of blaming Russia so that Washington could force Europe to cooperate in applying illegal sanctions on Russia in an attempt to destabilize Russia, a country that placed itself in the way of Washington's determination to destabilize Syria and Iran.

In a recent speech, the mindless cipher, who in his role as US Secretary of Defense serves as a front man for the armaments industry, declared the one trillion dollars (1,000 billion dollars or 1,000,000 million dollars, that is, one million dollars one million times) that Washington is going to spend of Americans' money for nuclear force renewal is so we can "get up in the morning to go to school, to go to work, to live our lives, to dream our dreams and to give our children a better future."

But Russia's response to this buildup in Washington's strategic nuclear weapons is, according to Defense Secretary Aston B. Carter, "saber rattling" that "raises serious questions about Russia's leaders' commitment to strategic stability."

Related Topic(s): Armageddon; Cold War; Neoconservatives; Nukes; Propaganda; Syria; Vladimir Putin, Add Tags
Add to My Group(s)
Go To Commenting
The views expressed herein are the sole responsibility of the author and do not necessarily reflect those of this website or its editors.