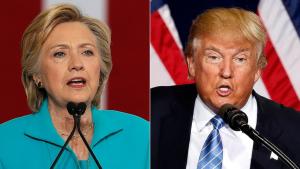 Tonight Hillary and Trump appear in identical -- but separate -- forums designed to detail their plans as Commander in Chief. Hillary Clinton's foreign policy positions are largely a part of historical record, from her time in the Senate, on the Senate Armed Forces Committee, and as Secretary of State. You can perform an online search and turn up thousands of transcripts (more on this later). Donald Trump? Not so much.

All we have from The Donald is his oft-changing statements and declarations about bombing Isis, or deporting Muslims, or withdrawing US troops from their foreign assignments, or -- egad -- using a nuclear weapon somewhere. So tonight should be a revelation, if we are to believe what he says is accurate. As many as 88 Generals have lined up behind him in recent days, so maybe they know something we don't? Or perhaps they feel he would be easy to manipulate, having zero experience in the military, in government, in politics, in damn near everything outside of the sleazy end of real estate deals, reality TV shows, beauty pageants, and phony universities. Tabula Rasa. He's literally a blank slate in all matters of state.

Returning to Hillary, if you've been listening to this program of late you know there is a deep divide among non-Republican voters. There's the "hold-your-nose and vote for Hillary to avoid a Trump dictatorship" faction, standing off against the "never Hillary" crowd. There hasn't been this much division in the party since Hillary and Obama were primary opponents eight years ago. This time it's much more complicated. As much as we disliked John McCain and thought Sarah Palin was a scary-bad joke, there was no sense of actual danger if McCain became president. Well, certainly not like the doomed feeling Trump invokes. McCain was a career politician with a military record and plenty of clarity on his foreign policy positions. Trump is...Trump. Textbook narcissist and total loose canon. So the stakes this time are incredibly high.

Like most of our friends on this side of the aisle, we were -- are -- staunch Bernie Sanders supporters. The fact that Bernie himself endorsed Clinton does lend weight to the "hold your nose" argument, but it must be considered that there was likely some closed-door negotiating and compromising for that endorsement, predicated on, perhaps, Clinton adopting many of Bernie's platform planks, like free college tuition and a $15/hour minimum wage. Obviously, a promise if not a guarantee -- witness Obama's promise to close GITMO or take to the streets in his "comfortable shoes" to march with educators if they were to strike. So we have no reason to believe with any certainty that Clinton would fulfill the "Sanders concessions." There is also the nasty stench of Debbie Wasserman Schultz' dirty dealings as DNC chair that lingers all over the Clinton camp. No question Sanders was deliberately undermined in the primaries, and that leaves us with an automatic dislike and mistrust of Clinton, for that reason alone.

And there are other reasons. Countless reasons for her low "trustworthiness" poll numbers. The nightmare that was Lybia and the Benghazi connection and alleged cover-up. The missing email, the private server, the carefully crafted responses in Congressional hearings, the enormous corporate contributions, the potential cross-over between her role as Secretary of State and the Clinton Foundation, lies about landing under sniper fire, refusing to release transcripts of her speeches to Wall Street donors, it goes on and on all the way back to her college years.

These are valid reasons to consider her honesty and moral character. On the other hand, we can't even get a peek into Trump's tax returns, much less any daylight on his business dealings, donations, the suspicious "university" and so on. Assuming that neither Dr. Jill Stein or Libertarian Gary Johnson receive a significant number of votes, are we left with a Hobson's Choice?

Mike and I have had many heated discussions on this as we wade through the murky waters of this campaign season. Neither of us are Hillary fans, but I side more with the "never" group as he leans toward the nose-holders. And Mike takes particular umbrage at the multi-decade assault the right-wing has leveled against the Clintons. Robert Reich has known Hillary since she was 19 and recently made the point that the unnatural scrutiny heaped on the Clintons had the effect of causing Hillary, naturally, to become more guarded and private and less transparent. Also noted is that fact that despite such meticulous nit-picking into every nook and cranny in their lives, nothing has been discovered, to date, to prove any of the charges against either of them (save the Monica debacle). Had I lived through that televised daily humiliation as Bill's wife, once I was back in Arkansas I don't think I would've ventured far from my home, much less rallied and run for the Senate.

Does this mean that real journalists (not NewsMax or Brietbart) should refrain from investigating her affairs when doubt arises? Of course not. But the never-ending witch hunt has been merciless. Even if you don't like her -- as I don't -- it is obscene. There are plenty of substantive issues to tackle in her history without chasing ghosts and drilling into the depths of dumpster. Let's keep looking into the Clinton Foundation donations while she was Secretary of State, yes. Force the release of her Wall Street speeches. Question the insane list of corporate donors and the source of her $120 million private fortune. Maintain the insistence on transparency. Just stop the dig for every speck of dirt that might be hidden under a marker line in an email. Don't we believe FBI Director Comey would've found her guilty if she was, in fact, guilty? Or is he part of some grand conspiracy to cover up her "crimes" as well?

Also, Hillary's senate voting record puts her near the top of the Congressional liberals during her tenure, within 10 points of Sanders, in fact. So it's no wonder the NeoCons were so desperate to take her down; they had a genuine fear that she might push liberal issues once in office, especially in the area of human and civil rights. Mike looks at the totality of the situation, senses a President Trump might become a power-mad Dictator Trump, and believes that the true left-leaning Democrats will pick up where Sanders left off and build a real third party by the next election. Clinton would be an unpleasant place-holder until an honest-to-God liberal could launch a successful campaign and finish what Sanders began. Hold your nose and work like hell for the next four years to take our party back.

Given all these debate points, why do I still caucus with the "never Hillary" stalwarts? A lot of it is personal. Having met her twice and knowing the daughter of a friend of ours who worked for her in the State Department has influenced my decision. Call it a gut feeling or woman's intuition, but I don't believe she will be a champion of the middle class. She was dragged toward the middle by Bernie Sanders, forced to adopt some of his platform and I have zero confidence that she will enact any of it. Further, her pro-Israel stance is deeply troubling to me, as is her desire to rid Syria of the Assad regime in what I believe might be a proxy war with Russia. And there is her intervention in Ukraine and meeting with Ukranian businessman Victor Pinchuk, who has given up to $25 million to the Clinton Foundation. And why lie about landing in a war zone under sniper fire when you know photographers are there snapping pictures of you accepting flowers from little school girls? That's just kind of stupid. Worse still, she's uttered barely a peep about what I believe to be the biggest threat we face as a nation, and as a planet -- global climate change.

Now there is a list of subjects worthy of a legitimate investigation. Not a witch hunt, but an actual impartial look-see. Too bad that's not possible anymore, now that the Fifth Estate is owned by corporations.

So I cannot in good conscience vote for Clinton. The doubts are too deep. I cannot lie with the devil I know rather than the devil I don't. Trump may take us into WW3 or appoint Supreme Court Justices that make Scalia look like a commie. I'm hoping that that would result in either 1) his impeachment or 2) a mass uprising of the people. Either way, the GOP would be decimated.

I will be casting my ballot for Dr. Jill Stein as the most moral choice available. Is it throwing away my vote? It's mine to toss away. Am I playing a part in a Trump election? Of course not. I view my franchise rights like my privacy rights: ain't nobody's business but my own, Baby. Be it the ballot booth or the Planned Parenthood clinic.

Kathy never expected a career in radio as a talk show producer. Born and raised in Atlanta, Georgia, Kathy was completing her nursing degree when in 2001 - in an emergency - she was asked to fill in as the producer of Mike's program. Within a few (more...)
Related Topic(s): Choice; Donald Trump; Hillary Clinton; President; Rights, Add Tags
Add to My Group(s)
Go To Commenting
The views expressed herein are the sole responsibility of the author and do not necessarily reflect those of this website or its editors.