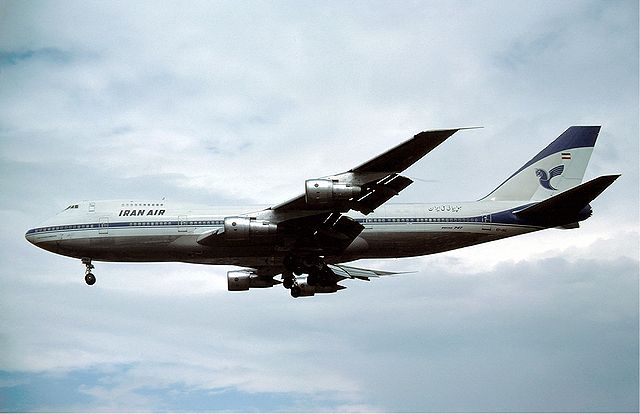 In June, US aerospace company Boeing inked an agreement with Iran Air to produce 109 passenger aircraft. Estimated value: $25 billion. The agreement represents the biggest business interaction between the US and Iran since that country's 1979 Islamic revolution.

On November 17, the US House of Representatives voted 243-174 to block the deal. The Senate seems unlikely to follow suit president Barack Obama would almost certainly veto the bill, but Boeing's stock took a temporary 2% tumble on the vote.

Why do House Republicans (the vote was pretty much party-line) want to destroy thousands of American jobs and hammer the revenues of a major American manufacturer?

Iran has an active nuclear weapons program (the US and Israeli intelligence communities say it doesn't).

Iran is violating the 2015 deal to end the non-existent program (the International Atomic Energy Agency says it isn't, apart from a few ten thousandths of one percent more heavy water than the deal allows them).

Iran sponsors terrorism (even if that's true, the US lacks moral credibility to complain about it given its 25-year, 24/7 terror campaign comprising hundreds of thousands of killings across the Middle East, Central Asia and Africa).

Those are the War Party's talking points. The conventional wisdom among the non-insane population looks more like this:

For nearly 40 years -- ever since the Iranian people rose up and overthrew the authoritarian monarchy installed by the US in a 1953 coup against its democratically elected government -- enmity with Iran has been a sacrament of American political class religion. It's one of those cold war relic feuds that our politicians just don't quite know how to let go of.

I think that conventional wisdom gives the political class too much credit for morals and too little credit for guile. The truth, in my opinion, is more along these lines:

Boeing builds swords and it builds plowshares. That is, it builds military aircraft and weapons systems on one hand, and civilian passenger aircraft on the other.

When Boeing builds plowshares, the only thing it's beholden to the political class for is permission. It shouldn't even have to ask pretty please, but unfortunately does. The politicians don't hold the purse strings, though. It's legitimate business.

When Boeing builds swords, on the other hand, it works directly for the politicians. The end user is either the US armed forces or a foreign military approved of, and probably funded by, American politicians. Kiss the ring, Boeing.

The War Party (both Republican and Democratic wings in tag-team fashion), given the opportunity, prefers to forbid Boeing to build plowshares and keep it in the position of begging to build swords.

Not that Boeing is innocent in all this. Since World War II, the primary mission of the US government has been to transfer money from your pockets to the pockets of Boeing and other "defense" contractors.

But Boeing's 150,000 employees are relatively innocent. Those employees have families and friends. All of them who vote should remember which members of Congress tried to send them to the unemployment line on November 17.

Related Topic(s): Boeing; Iran; Iran Embargo; Iran Nuclear Deal; Sanctions, Add Tags
Add to My Group(s)
Go To Commenting
The views expressed herein are the sole responsibility of the author and do not necessarily reflect those of this website or its editors.