Both Liz Warren and Bernie Sanders have said it will take a grassroots movement, not just their own efforts, to produce the overthrow of plutocratic rule they'd like to see. Politicians should be damn careful what they ask for in public, unless they really mean it. The time has arrived to give Warren and Sanders exactly what they've asked for--and to call their bluff about whether they really mean it. Movements are dangerous, having this quirk of turning on Judases who sell them out. 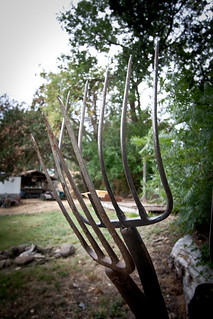 Pitchforks--Ideal symbols for a new movement. But which side of the pitchforks will Warren be on?
(Image by andrewmalone)   Details   DMCA

Speaking of Judases--and politicians who should be careful about what they say within public earshot--Barack Obama has actually, unbeknownst to himself, given our nascent movement something to be eternally grateful for. No, I don't mean his executive order on immigration (since that would be beknownst to himself), though that certainly deserves applause as a step in the right direction--and a belated attempt to shed his "Judas goat" horns. What I mean is a remark Obama carelessly made within public earshot, though certainly not for public consumption. Recall that little Obama comment --to an assembly of elite banksters --"My administration is the only thing between you and the pitchforks"? Well, if you don't recall it, you're hardly ready for an effective resistance movement. The Anonymous "hactivism" collective has this perfectly right: "We do not forgive. We do not forget." And in this case, what we should not forget--besides Obama's shielding both Wall Street and Bush war criminals from prosecution--is his inadvertently handing us the pitchfork as the perfect symbol for the next popular movement. The one that could WIN.

Now, the pitchfork as symbol is a godsend: bundling populism, anti-plutocracy, outrage, revolt, reverence for the Earth that sustains us, and links to America's founding rebellion all in one potent computer-ready icon. As a repurposed, "improv" weapon of normally peaceful laborers, forced solely by oppression to fight, it's an utterly perfect symbol. Indeed, along with the pitchfork, revived interest in Thomas Paine, the most under-recognized and by far the most democratic and most visionary of our nation's founders, sets the perfect tone for a new populist revolt. We'd be fools not to see in Thomas Paine--ironically, since he bitterly fought "priestcraft," hierarchy of all sorts, and blind faith--our movement's patron saint. And not to see the pitchfork as by far its most potent potential symbol. So much so, we should consider calling it "Pitchforks against Plutocracy." Or the "Pitchfork Movement" for short.

Now, this author is only one voice among many; unlike the patriarchal God the Father, I propose but do not dispose; the needed, burgeoning movement should itself decide on its name, its proper symbol(s), and its "patron saint(s)." Those suggestions, like the needed movement's strategy--anticipating input from fellow "aspiring revolutionaries"--can await another article. What needs to be discussed here is the relationship between the essential populist movement and those "system" politicians who have called for it--like Liz Warren and Bernie Sanders.

The word on Bernie Sanders must be brief, since he, as a heroic political outsider, is probably fated to be our movement's John the Baptist rather than its "Savior." Bernie, provided he retains his fidelity, deserves well of all populists, as he has heroically kept the embers of our nascent movement burning when there was no reward in doing so--or when there was actually no movement, not even a potential one. As the ways of God (or history, keeping to Thomas Paine's skeptical spirit) are strange, Bernie, despite his immense merits, is probably herald for someone who (the jury is still out) is perhaps "unworthy to loosen his sandal straps." Because any successful political movement must be rooted in realism, the remaining focus in this article must be on Liz Warren, who is perhaps aspiring to "employment beyond her pay scale." Or someone, to speak more frankly, the very movement she called for may someday be forced to brand a Judas. For Bernie himself, we should reserve the honor of being vice president, where he'd help keep Warren honest.

To Elizabeth Warren's fans, the previous paragraph may seem harsh. But that paragraph was not written by a Liz Warren fan, but by a Thomas Paine and Bernie Sanders fan and a bitter enemy of plutocracy. Now, Liz Warren's words may offer enemies of plutocracy profound hope, but her membership in today's sold-out Democratic Party and her brainless "Beltway consensus" support for both Israeli and the "global war on terror" invite equally profound skepticism. Any movement invoking Thomas Paine as its "patron saint" (a title that would doubtless have made Thomas Paine cringe, but symbols and heroes are key elements of movement building) must studiously refrain from worshipping Saviors-- and Liz Warren is NO exception. Quite simply, movements need to be pragmatic if they mean to win, and Warren is simply the best (though possibly unworthy) prospect history, in its endless quirkiness, offers us. She asked for a movement, and any serious one must be ready to disown her in a heartbeat if she goes playing Judas. If Obama taught us anything, it should be the folly of blindly trusting Democrats.

But history, in its endless quirkiness, demands that we trust Liz Warren. But trust her provisionally, with an ever-present readiness to repudiate her at any clear sign of betrayal and brand her a Judas. "Bipolar" as that may sound, it represents the quintessence of political logic. Probably, Shakespeare put it best: "Lilies that fester smell far worse than weeds." In invoking the rights of Main Street against Wall Street, Warren is invoking a high ideal, ultimately the ideal of Jesus Christ himself, an ideal that could propel her to greatness. To prostitute that ideal for a low purpose--like preserving the last-ditch political credibility of corporatist Democrats--richly earns a person public exposure and condemnation as a descendent of Judas. On Warren herself, the jury remains out.

But while we're suspecting motives, we should be equally skeptical of the "Born to Lose" Left. One senses in their pigheaded, knee-jerk rejection of any Democrat--even a woman preaching the new movement's essential message--a blind clinging to their own "one trick pony" shtick: a comfortable self-righteous allegiance to hopeless politics in the interests of an ego-gratifying political purity that changes nothing. A stance that blinds them to Warren's game-changing potential even if she's punching far above her weight class. And even if she proves to be a Judas.

Frankly, the time is ripe for a first woman president--and God forbid that president should be Hillary Clinton, perhaps the best friend plutocratic "dead white males" ever had. As the perfect antidote--a woman preaching the desperately needed anti-plutocrat gospel--Liz Warren is either aspiring to the mantle of greatness or playing with fire, a conflagration that will consume both her and the Democratic Party in its flames. But if the needed movement doesn't--provisionally and distrustfully--support Liz Warren, we'll just get Hillary's lukewarm surface (concealing, as with Obama, the stealth radioactive poisoning of our body politic)--with zero prospect of that needed fire . So the new movement should provisionally embrace Liz Warren--as Democrat's LAST CHANCE--and hope she can ignite an all-reforming "blue flame." If Warren proves a Judas, movement members should all vengefully join the Green Party and ignite a "Green conflagration" that spells electoral death for both Warren and Democrats. All Warren's fault, for igniting a historical fire she wasn't worthy to light and could not control.

It's time to raise those pitchforks high!

Related Topic(s): Anonymous; Betrayal; Bluewashing; Credibility; Democratic; Green Party; Green Party; Heroes; Jesus; Obama; (more...) Plutocracy; Populism; Revolution; Warren-Elizabeth, Add Tags  (less...)
Add to My Group(s)
Go To Commenting
The views expressed herein are the sole responsibility of the author and do not necessarily reflect those of this website or its editors.