Trump is a paradox: he is both an open book, unable to hide his volatile emotions, and, at the same time, a man it is impossible to understand, man whose true intentions are concealed.

He speaks out of not only both sides of his mouth but through his theatrical body language.

When a man gives contradictory pronouncements ("NATO is obsolete" and "I am a big fan of NATO.")we are puzzled.

He is either lying or keeping his options open: it is impossible to know from his public rhetoric what he really thinks. Therefore, he cannot be understood. He brags about being a mystery and, like Nixon, thinks that being perceived as mad, or unpredictable, is a great strategic move. How did that work out for Nixon?

Here is how Nixon explained it to Haldeman: "I call it the Madman Theory, Bob. I want the North Vietnamese to believe I've reached the point where I might do anything to stop the war. We'll just slip the word to them that, "for God's sake, you know Nixon is obsessed about communism. We can't restrain him when he's angry--and he has his hand on the nuclear button" and Ho Chi Minh himself will be in Paris in two days begging for peace.

Here is an exchange with Chris Matthews in March:

TRUMP: The question was asked"--"we were talking about NATO"--"which, by the way, I say is obsolete and we pay a dis --

MATTHEWS: But you got hooked into something you shouldn't have talked about.

TRUMP: Of course. If somebody --

Somebody hits us within ISIS"--"you wouldn't fight back with a nuke?

MATTHEWS: OK. The trouble is, when you said that, the whole world heard it. David Cameron in Britain heard it. The Japanese, where we bombed them in 45, heard it. They're hearing a guy running for president of the United States talking of maybe using nuclear weapons. Nobody wants to hear that about an American president.

TRUMP: Then why are we making them? Why do we make them?"

This brief exchange brings out both his Nixonian theory of unpredictabily as a negotiating tactic.......and his laying out plans no other President has ever discussed publicly while at the same time endorsing the idea of keeping your true intentions concealed.

Trump is a Nixon Republican in adopting this madman theory and in using Nixon's Southern Strategy on steroids. This suggests that the contradictions he rationalizes as smart thinking will bring him down. He is also aligned with all the far right parties in Europe, with their focus on expellling immigrants.

For instance, he wants peace with Russia but all his foreign policy advisors and possible Secretaries of State (he is running a beauty contest with what he called "the finalists.") are anti-Russian neo-cons with the stated goal of trashing the Iran deal and, as Bolton said, bombing Iran to end their non-existent nuclear weapons program. This like a man hiring arsonists to put out the fire!

So is this his famous unpredictability (which of course brought Nixon down in disgrace) or a clear message that his goal is war? it is impossible to know until we look at the advisors we have chosen, whose views are an open book because they have been the source of war propaganda going back to Reagan. His advisors are the visible face of the dark side, the Deep State.

When a leader uses both mystery (What the hell does he really intend?) and contradiction, and at the same time is a master snake oil salesman who has mastered the art of winning by making everyone else lose, we are bewildered. He made money on 6 bankruptcies: "I am the King of Debt....I love Debt..." the words of a heavily leveraged speculator, which explains why his threats to end the power of Wall St is belied by a list of "finalists" for Secretary of the Treasury from Wall St. Add to that that his first foreign policy advisor is James Woolsey, former chief of the CIA and Wall St speculator (the CIA is Wall St, based on the revolving door since Dulles), was the guy who led the rush to war against Irag by claiming he had evidence that Saddam was complicit, the Big Lie that, along with the fiction of an active WMD program, justified a criminal war.

WASHINGTON (AP) -- Nearly seven in 10 Americans believe it is likely that ousted Iraqi leader Saddam Hussein was personally involved in the Sept. 11 attacks, says a poll out almost two years after the terrorists' strike against this country."

He lied, he is guilty of the propaganda that rationalized a war that has slaughtered half a million and continues........and he is Trump's choice to advise him. If Trump crosses him well the CIA has ways to deal with those who cross them.

When Trump sabotages the Iran deal (he will claim Iran has violated the agreement and free repayment of their money), the drums of war will roll. Russia, China, and iraq---all strong allies with economic and military ties--will turn on the US....and the peace initiative will be exposed as the fraud that it is.

Most of us like the idea of peace with Russia (and let us note he has financial ties in Russia...as in 21 other nations) but why then has he hired anti-Russian war mongers to lead his foreign policy team? We are in the wilderness.... 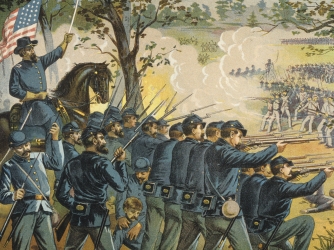 Battle of the Wilderness: The War for Freedom

That being said, when things are unclear, the likely outcomes are unexpected,and we have surprises such as black swans.
This is how Trump, a born rich member of the financial and media establishment but a political outlier, using the Nixon madman/racist strategy, came to power, something very few predicted.

See my article Trump is Winning!

Related Topic(s): Backlash; Black Swan; Future; History; Iran; Iraq; Irrational; Propaganda; Strategy; Strategy - Strategies; (more...) Unintended Consequences, Add Tags  (less...)
Add to My Group(s)
Go To Commenting
The views expressed herein are the sole responsibility of the author and do not necessarily reflect those of this website or its editors.