(Here's my column from the latest print edition of CounterPunch Magazine. It was written three days after the election.) 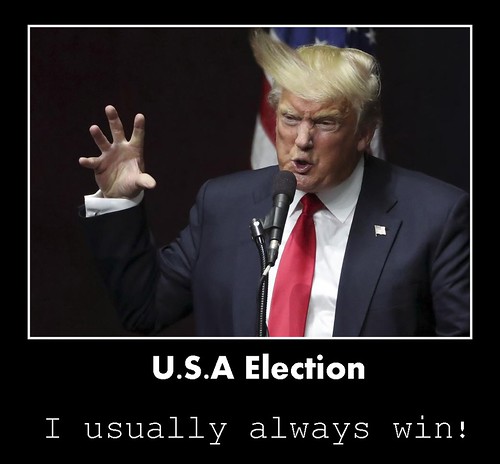 There has been great consternation in the world over the fact that Donald Trump, runner-up in the 2016 vote ("Weak! Loser!"), will soon be president of the United States, thanks to the Rube Goldberg contraption set up by white elites in the 18th century to prevent the despised rabble from directly choosing their leaders. (And just to be sure, the Southern slave-owners and their Northern compatriots also disenfranchised the vast majority of the populace while they were at it. Only white men of property -- like them -- were to be allowed to choose the electors who would do the choosing for all the scum out there.)

Much of the hand-wringing over Trump focuses on the "unprecedented" nature of his candidacy and his presidency. Here, for example, is Bill Moyers (yes, the same Bill Moyers who serviced Lyndon Johnson while he was raining napalm on the civilians of Vietnam):

"America died on Nov. 8, 2016, not with a bang or a whimper, but at its own hand via electoral suicide. We the people chose a man who has shredded our values, our morals, our compassion, our tolerance, our decency, our sense of common purpose, our very identity -- all the things that, however tenuously, made a nation out of a country."

Putting aside the fact that "we the people" actually chose Hillary Clinton (by a razor-thin margin, but still) on November 8 ("Trump! Loser! Weak!"), the LBJ factotum -- now seen as the iconic conscience of American liberalism -- seems to have forgotten the entire presidency of another dim-bulb celebrity spinning lies and fantasies and racist tropes, appointing nutty extremists to important posts and unleashing ugly forces in society.

Yes, we speak of rouge-cheeked Ronnie Reagan. Those of us of a certain age remember his screwball appointments -- like James Watt, Secretary of the Interior, who told Congress there was no need for conservation programs, because Jesus was coming back in our lifetime. We remember how Reagan, like Trump, made racism the centerpiece of his campaign, which began with a Jim Crow dog-whistle about "states rights" at the site of the "Mississippi Burning" murders and featured lurid fantasies about a big, black "welfare queen" scamming taxpayers to feed her brood of black bastards.

We remember how this weird, vacuous celeb (whose wife set his schedule by consulting an astrologer) destroyed unions, escalated the nuclear threat, armed and bankrolled Islamic terrorists (to hotfoot the Commies), supported rightwing terrorism and genocidal murder rampages in Central America, backed brutal tyrants (like Saddam Hussein), rolled back environmental protections and facilitated countless other crimes and sinister follies.

So yes, Trump is a loathsome toad, but he's no surprise, no unprecedented, out-of-the-blue eruption of a new dark turn in American politics. That darkness has always been there, and it has to be fought, again and again and again. We fought Reagan, and we survived him. We'll fight Trump, and we'll survive him too.

But in the immortal words of Kruhulik the Janitor, don't let's be naive. The idea that the American darkness resides solely on the right, occasionally surging up (Goldwater, Reagan, Bush II, Trump) then reverting to a default mode of basic decency, is one of the most persistent -- and pernicious -- of the many myths that "progressives" pull around themselves like a security blanket. The American state itself is deeply, inherently, horribly corrupt, and all those who wield its power are drenched in blood. They are all, without exception, beyond the pale of human decency, of law, of morality. It is not a normal system; as Thoreau once said, no decent person can be associated with it.

Consider a system whose top leaders acknowledge that their brutal blockade of an already defeated enemy has taken the lives of 500,000 innocent children -- and proclaim these murders are "worth it." A system that launches a war of aggression that kills a million innocent people and plunges the world into endless carnage and ruin. A system whose president sits in his office each week ticking off names of people to be arbitrarily murdered, and who gives his minions carte blanche to kill complete unknowns (including children) engaging in alleged terrorist "signature" behavior -- such as loading shovels into a truck on their farm. A system where armed and armored police gun down hundreds of unarmed citizens each year

The notion that such a system -- which has taken the lives of millions of innocent people within the last generation alone -- has only now, with the election of Trump, lost "its compassion, its decency," is obscene. I do think the election of Trump is a calamity; but the mere continuation of this insanely depraved system -- whether under the temporary management of a sinister clown like Trump or a "super-competent" imperial technocrat like Clinton -- is also a calamity.

Trump didn't "shred" the values and identity of the American system; he held the mirror up to it and showed us all its true, hideous face. No amount of self-righteous, self-congratulatory self-delusion on the part of our progressives -- who have countenanced enormous crimes against humanity committed by its heroes -- will change this sickening truth.

Related Topic(s): America Culture Of Violence; American Facism; Donald Trump Lies; Politics; Trump Presidency, Add Tags
Add to My Group(s)
Go To Commenting
The views expressed herein are the sole responsibility of the author and do not necessarily reflect those of this website or its editors.