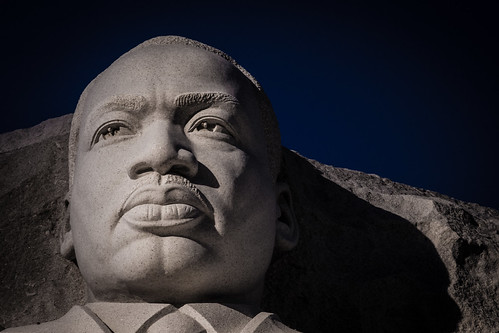 Who the hell thought up such a slogan? Martin Luther King or Malcolm would never have made up such a wimpish slogan. Strikes one as beggarly, deplorable like 'Hey, Blacks are People Too,' or 'Please Stop Killing Black People.' No, centuries long internationally institutionalized racist crime against humanity deserves a stronger slogan.

Mohammad Ali put it straight and strong, "the domination of white slave masters of the darker people the world over." Only Ali was talking about both racist murder both in and outside the USA, relating them as in reality, not as in the case of the 'Black Lives Matter' only in the US.

Check out what Ali slammed the white world with! "Why should they ask me to put on a uniform and go 10,000 miles from home and drop bombs and bullets on Brown people in Vietnam while so-called Negro people in Louisville are treated like dogs and denied simple human rights? No I'm not going 10,000 miles from home to help murder and burn another poor nation simply to continue the domination of white slave masters of the darker people the world over. This is the day when such evils must come to an end. I have been warned that to take such a stand would cost me millions of dollars. But I have said it once and I will say it again. The real enemy of my people is here. I will not disgrace my religion, my people or myself by becoming a tool to enslave those who are fighting for their own justice, freedom and equality. If I thought the war was going to bring freedom and equality to 22 million of my people they wouldn't have to draft me, I'd join tomorrow. I have nothing to lose by standing up for my beliefs. So I'll go to jail, so what? We've been in jail for 400 years." Underlines by author emphasize Ali's connecting US overseas racist genocide with racist genocide at home.

And regardless of the US establishment pretending to stop it, it is genocide by the definition of genocide in the Convention on Genocide. Article 2 of the "Convention on the Prevention and Punishment of the Crime of Genocide defines genocide as any of the following acts committed with intent to destroy, in whole or part a national, ethnical, racial or religious group, as such:

(a) Killing members of the group;