No, don't be ridiculous. Don't even think it, or wildly speculate. It was not in the US and not a US billionaire.

Thomas Kwok
(Image by (From Wikimedia) Exploringlife, Author: Exploringlife)   Details   Source   DMCA
Bloomberg News reports "Billionaire Thomas Kwok, the former Sun Hung Kai Properties co-chairman, was sentenced to five years in jail and fined $64,460 for conspiring to corrupt Hong Kong's No. 2 official."
Just imagine that happening in the US-- any billionaire going to jail. Is it possible?
The US has one more statistic going against it now-- a nation where no billionaire goes to jail. And frankly, it surprises me that any nation has the integrity and strength of its justice system to actually bring such a wealthy person to justice.
Of course, even in Hong Kong, billionaire Kwok will be appealing his sentence and conviction.
There are more billionaires in the US than any other country in the world. The only one I can think of who was convicted was probably no longer a billionaire by the time he was convicted-- Kenneth Lay's Enron shares had become worthless. And then he died-- though Wikipedia says, "There have been conspiracy theories about his death."
Still, with 492 billionaires, according to Wikipedia, we might estimate that at least 40 or 50 of them are psychopath or sociopath. That's a frightening thought. Then again. there are no stats or studies on billionaires. It could be that half of them or more are predatory, narcissistic sociopaths.
As I've written in the series this article is a part of, it is time to legislate and by other legal means end the age of billionaires. They are far too dangerous, even the well meaning ones.
Maybe, though, the way Ken Lay ended up being prosecuted is the way it needs to be done-- taking down the whole company that's been run by a criminal. 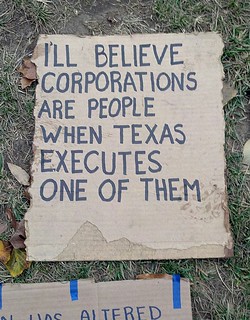 I'll believe corporations are people when Texas executes one of them (Occupy DC)
(Image by takomabibelot)   Details   DMCA
Signs with that message were all over Occupy locales. Maybe that's what it takes to take down a billionaire. It's estimated that eight percent of the population is sociopathic and that there are a higher percentage running corporations. I'd speculate that it takes some sociopathy to become a billionaire-- not for all, but for many. Sociopaths, psychopaths and narcissists don't believe that laws and rules apply to them-- they live as thought they are above them.
We've had 14 years of Attorneys General who have protected the wealthy and prosecuted the whistleblower heroes. It's time that is changed. Hong Kong can do it. The Bloomberg article even suggests that mainland China influence helped to make it happen.
I wonder what it will take, what kind of influence will be necessary for the US to start prosecuting billionaires, CEOs and let's throw in bad cops too.

Related Topic(s): Billionaires; Corporate Personhood; Hong Kong, Add Tags
Add to My Group(s)
Go To Commenting
The views expressed herein are the sole responsibility of the author and do not necessarily reflect those of this website or its editors.