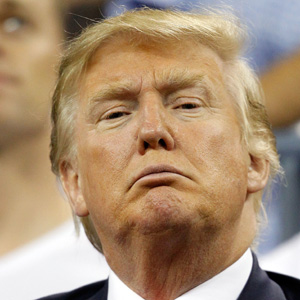 George Orwell's 1984 is now dangerously close to reality. In the picture above, Donald J. Trump looms on the large screen, bringing an ominous reminder of Orwell's "Big Brother."

The acceptance speech Trump gave on the closing night of the Republican National Convention was filled with emotional shouts designed to engender fear.

Donald John Trump's speech echoed a tone across the years, a reminder of four of Orwell's oft-quoted slogans from his 1949 dystopian novel, 1984: "War is peace; Freedom is slavery; Ignorance is strength; Big Brother is Watching You."

The Democrats will nominate Hillary Clinton this week. On Friday, she announced Virginia Senator Tim Kaine as her vice-presidential choice, a decision which could stir a negative convention response from Bernie Sanders' delegates.

It is, however, an establishment choice her delegates and donor base will embrace.

Vote for Jill Stein's Green Party or Gary Johnson's Libertarian Party if you like. But remember, a third party vote is a feel-good protest. Save it to vote for next year's Homecoming Queen and King.

The harsh reality is that we have reached a moment of serious choice where we have the power to give the White House to Orwell's "Big Brother" or to the Establishment's Chosen One.

Choices of this magnitude are never easy. Not to choose, however, is to hide in fear in a foxhole on our national political battlefield.

Donald Trump's acceptance speech gave us more than enough reason to stay with the Establishment, as distasteful as four more years of neoliberal militarism will be.

Molly Ball, in The Atlantic, offered her analysis of the convention that pushed this nation to its penultimate decision for president. She began:

"And so it came to pass, in the year 2016, on a sunny day in America's heartland, in a hall smelling of sweat and popcorn and filled with a seething, roaring crowd, that Donald Trump -- builder, shocker, demagogue, smasher of certainties, destroyer of the Republican Party, winner -- accepted his party's nomination, with a vow to restore order.

"'Americans watching this address tonight have seen the recent images of violence in our streets and the chaos in our communities,' Trump proclaimed, his hand slicing the air, his pompadour gleaming with the reflection of hundreds of lights. 'I have a message for all of you: The crime and violence that today afflicts our nation will soon -- and I mean very soon -- come to an end,' he added. ..."

Trump exploits the senseless deaths of police officers, to create fear in his listeners. It was a simplistic, bombastic Trump "toe in the water" dip into a complex domestic crisis. He promises to "restore order" to the nation "very soon."

Related Topic(s): Choice; Donald Trump; Speech; Tyranny, Add Tags
Add to My Group(s)
Go To Commenting
The views expressed herein are the sole responsibility of the author and do not necessarily reflect those of this website or its editors.