I am an ardent fan of Bernie Sanders' call for political revolution, because I'm an equally ardent fan of Naomi Klein's climate justice vision. That vision, which Klein convincingly argues for in the book This Changes Everything, entails a program of coordinated policies--essentially progressive ones--that nations must implement worldwide as preconditions for tackling humanity's climate emergency. In depicting a world of peace, vastly greater economic equality, transparency, accountable government, democratic elections, and equitably shared responsibilities and benefits that Klein essentially provides the blueprint for to a new and desperately needed global civilization-- perhaps the first one to truly deserve the name. 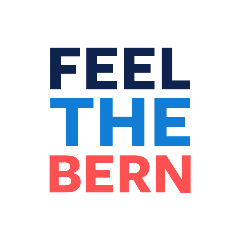 Unfortunately, the road to Klein's "brave new world" must begin in our bad old one. Klein herself is very aware of that fact. This Changes Everything amply laments humanity's misfortune in having a neoliberal "magic of markets" ideology enshrined in our planet's seats of power, when what's urgently needed is a progressive ideology stressing democratic governments' active intervention in markets for the sake of the common good. Market solutions alone are clearly no more than a Band-Aid on our planet's gaping climate hemorrhage, and as the celebrated French economist Thomas Piketty convincingly shows in his book Capital, the natural, uncorrected tendency of capitalism is towards vast concentrations of wealth and plutocratic domination of government. Exactly the kind of riding roughshod over democracy we now have, both domestically and globally.

But government of the rich, by the rich, and for the rich must soon perish from the earth--or the climate perishes first.

And the necessary vehicle for dislodging the rich from unjust monopolization of power is, and has always been revolution-- an overthrow of the existing order. Now, nothing decrees that such an overthrow need be violent; England's "Glorious Revolution" was dubbed glorious precisely because it was peaceful. But in calling for a political revolution (which Bernie clearly intends to be peaceful), Bernie Sanders alone among U.S. presidential candidates has embraced the right diagnosis and remedy.

And that suspicion very much entails censorship, with the result that Bernie, having breathed the incendiary word "revolution," gets to provide precious little direction to his budding revolutionaries about what revolution means. Hence my own summary of Kaufman's "Sanders paradox": while revolutions break eggs, Bernie's Democratic campaign must walk on them. And the DNC's draconian immediate denial of the Sanders campaign's access to its own data files (again, see here ), after some Sanders staffers (whom Bernie soon fired or disciplined) had viewed Clinton campaign data during a temporary breach in a computer firewall; which illustrates the party establishment's hair-trigger readiness to shut down Sanders' campaign.

So, Bernie must evidently walk on eggs, though the harder-left is likely correct that he walks more gingerly than he really needs to. For Bernie self-censors to the point of being counterrevolutionary--above all, in failing to emphasize the radical difference between himself and Hillary Clinton; the difference being a genuine revolutionary challenge to the political establishment (which includes most of the Democratic Party), which Bernie has every interest in highlighting. While the harder-left is less charitable, accusing Bernie of intentionally playing Hillary Clinton's progressive-herding sheepdog , I find evidence Bernie's hesitation to drive a huge wedge between himself and Clinton is based on a genuine fear of Republican rule.

Unfortunately, fearing Republican rule more than the continuance of our climate-toxic status quo is the wrong order of priorities for political revolutionaries--above all for those of us who intend to fight revolution under Klein's climate justice banner. Here, we find the "Sanders paradox" at its deepest: fans of Sanders' call for revolution must oppose Bernie's personal rejection of what his revolution must do, or else watch his revolution die without a whimper before it has scarcely begun. For Hillary Clinton perfectly embodies the toxic status quo; and make no mistake: any revolution ending with Clinton in the Oval Office simply ends.

We who are fans of Bernie's revolution must categorically reject Hillary Clinton--or dictate the terms of her presidency to her, as Parliament did to William and Mary in England's Glorious Revolution before trusting them with the British crown. The promise of Bernie's revolution is totally lost if Clinton is elected and allowed to govern as her establishment self. But even the prospect of our placing Clinton in a William and Mary style straitjacket involves first rejecting everything she is.

If Bernie's call for revolution means a stark facing down of intolerable realities, and not just rhetoric, it must, like all other revolutions, regard the continuance of the status quo represented by Clinton and her ilk as a peril to civilization itself. Since Clinton's climate-toxic, suicidal old civilization is at odds with Naomi Klein's planet-saving new one, I find the best way for Bernie's revolutionaries to frame the Bernie vs. Hillary electoral contest is as a "clash of civilizations." Ironically, Samuel Huntington's infamous phrase, which has provided the charter for so much Islamophobia and permanent war, can become climate justice activists' best tool for explaining the necessity of peaceful, planet-saving revolution. And it should become our rallying cry for organizing voter opposition to Clinton.

And in speaking of organizing voter opposition to Clinton, I have a revolutionary weapon for doing so very much in mind. Namely, Revolt Against Plutocracy's Bernie or Bust pledge. And I'm pleased to announce that Revolt Against Plutocracy (RAP) is considering taking that pledge in a bolder, more revolutionary direction; one better suited to a "clash of civilizations" between Klein's peaceful climate justice civilization and Clinton's warmongering climate-destroying one.

Starting in the New Year, the Bernie or Bust pledge may become a "Bernie or Green 2016" pledge, based above all on RAP's disgust with the overwhelming number of elite Democratic politicians, who have spit into the faces of progressives and climate activists by endorsing Hillary Clinton.

Green Party presidential candidate Jill Stein has shown herself very receptive to offering herself as "Plan B" to Sanders supporters "Burned" by the pro-Clinton establishment. If even progressive Democrats like Alan Grayson and Sherrod Brown can array themselves with Clinton against climate justice, it's probably time for climate justice activists to give up on the Democratic Party.

In a clash of civilizations (even peaceful revolution is a war) there is only one word for accepting Clinton's victory by force over our opposing civilization view: surrender. In their high-handed demand that Bernie's revolutionaries simply vote for Hillary should Bernie lose the nomination (in a rigged, pro-Clinton process to boot), Hillary and her supporters are in fact demanding our unconditional surrender to a "civilization" we heartily detest. They should hardly be surprised to find us deeply offended by their imperious demand. Naomi Klein subtitled her book "Capitalism vs. the Climate." She might just as well have subtitled it "Clinton vs. the Climate." The clash of civilizations involved is essentially the same.