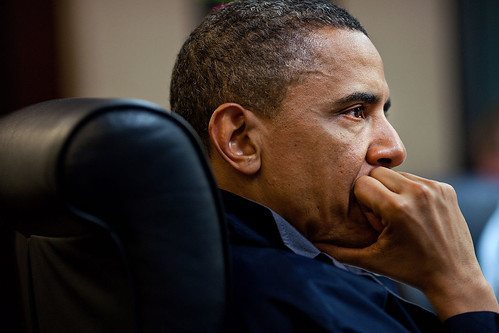 President Barack Obama has long been under fire from the US national security elite and the media for failing to intervene aggressively against the Assad regime.

But the real strategic blunder was not that Barack Obama didn't launch yet another war in Syria, but that he decided to go along with the ambitions of America's Sunni allies to create and arm a Syrian opposition army to overthrow the regime in the first place.

Now a former Obama administration official who is knowledgeable on the internal discussions on Syria policy, speaking to this writer on condition of anonymity, has shed new light on how and why that fateful decision was made.

The former official revealed that when Obama made the first move toward supporting the arming of Syrian opposition forces, the president failed to foresee the risk of a direct Iranian or Russian intervention on behalf of the Syrian regime in response to an externally armed opposition -- because his advisers had failed to take this likelihood into account themselves.

The story of this policy failure begins after military resistance to the Assad regime began in spring and summer 2011.

In August 2011, national security officials began urging Obama to call on Assad to step down, according to the former official.

Obama did make a statement suggesting that Assad should step aside, but he made it clear privately that he had no intention of doing anything about it. "He viewed it as simply a suggestion, not a hard policy," the ex-official said.

But soon after that, a bigger issue arose for the administration's policy: how to respond to pressure from Turkey, Saudi Arabia and Qatar for a US commitment to help overthrow Assad.

Turkey even offered to send troops into Syria to overthrow Assad, but only if US and NATO agreed to create a "no-fly zone" to protect them.

But Obama refused to provide US arms to the Syrian rebels and also opposed the Sunni foes of Assad providing such heavy weapons. "He wasn't willing to go along with anything except small arms," said the former official.

Apparently to assuage the dissatisfaction of the Sunni allies, then-director of the CIA David Petraeus devised a plan, which Obama approved, to help move the small arms from Libyan government stocks in Benghazi to Turkey.

Confirming the 2014 story by Seymour Hersh, the ex-official, recalled, "It was highly secret but officials involved in the Middle East learned of the program by word of mouth."

Related Topic(s): Bashar Al-assad; Blunders; Obama; Sunni; Syria, Add Tags
Add to My Group(s)
Go To Commenting
The views expressed herein are the sole responsibility of the author and do not necessarily reflect those of this website or its editors.