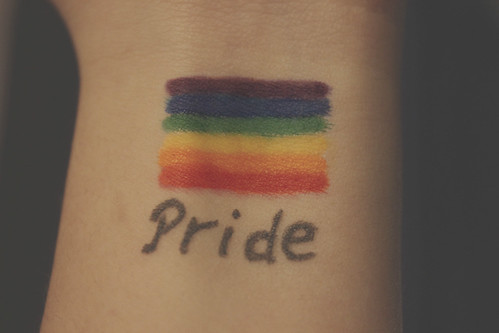 When I was a junior at San Diego State, I had a sudden urge to need a restroom. The closest one was clearly marked, "Faculty Men Only." The nearest one for male students was on the other side of the building.

I did what any rational person would do--I used the faculty restroom.

One of the professors, who was using a urinal a couple spaces away, told me the restroom was for professors only. (I assumed there were separate restrooms for staff.) "What department are you in," asked the prof.

In my deeper voice, I responded I was with sociology, hoping he knew little about the sociology faculty.

"Just out of grad school?" he asked.

"Yeah," I replied, hoping that I looked much older than my 19 years. I wasn't lying. I was "with sociology"--as a student, though. And, since I had no plans to go to grad school, I was truly "out of grad school."

The prof. said nothing more, apparently finished with emptying his bladder and, hopefully, needing to rush to the sink and then a class.

That brief encounter burnished a memory into my mind.

San Diego State no longer separates students from staff or faculty, but states do discriminate.

Twenty-two states have filed suits in federal courts to block a federal government regulation requiring public schools to allow transgender students to use the restrooms of whichever sex they identify with.

The Department of Justice says the new regulation conforms to the will of the Civil Rights Act. The attorneys general of the states that filed the suit claim the government's regulation is an over-reach that violates the authority of local school districts while also violating student, staff, and faculty privacy. U.S. Attorney General Loretta Lynch says the regulation is enforceable. Jay Kaplan, an attorney with the Michigan ACLU, told the AP the suits are not only a waste of taxpayer funds but also "an assault on the dignity of transgender youth." Perhaps society is best served by separating politicians from the public--straight male Democratic politician; lesbian female Republican politician; there could be 10 or so such restricted restrooms to identify most sexual and genetic orientation.

Unlike gays and lesbians (who identify with persons of the same sex), transgender individuals--unlike actors and entertainers (many known as drag queens or drag queens) who portray persons of the opposite sex--are those whose fetal brains and gene structure, rather than external anatomy, identify them by gender rather than sexual orientations. Transitioning requires more than surgery; the anatomy and genetics are just a part of who an individual is.

Related Topic(s): LGBT; Laws; Lesbian; Politicians; Privacy; Privacy; Religion; Sex; Students; Transgender, Add Tags
Add to My Group(s)
Go To Commenting
The views expressed herein are the sole responsibility of the author and do not necessarily reflect those of this website or its editors.