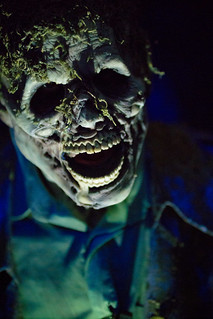 A bunch of teens decide to go up to The Old Dark House on the night of the full moon. As they mount the creaking stairs up to the front porch the nerdy guy of the group says, "I don't think this is a very good idea guys."

Of course it's not.

What the teens don't know ... but what everybody in the theater audience knows ... is that somewhere in The Old Dark House is:

An escaped lunatic from a nearby insane asylum who has returned to the house where he committed terrible unspeakable murders. It was, in fact, This Very Night 20 years ago when he took an axe and chopped up his entire family.

An Alien needs to extract fresh pituitary glands from human beings between the ages of 18-24. It needs to do this once every 20 years in order to continue to masquerade as a human and This Very Night is its last chance.

The house was once inhabited by satanists who performed arcane rituals to open a Portal to Hell in the cellar. A blood sacrifice is needed to keep the gates of hell closed for another 20 years and ... you guessed it ... The Door opens This Very Night.

Hidden in the cellar are the rotting bodies of the victims of the current slasher killer who has been terrorizing the town. Unbeknownst to the teens is one of their own group is the killer. And is probably related to the lunatic currently imprisoned in a nearby insane asylum for hacking up his family This Very Night 20 years ago.

Regardless ... it's past curfew ... and the band of teens enter The Dark Old House.

As soon as they're through the door the Alpha-Male leader of the group suggests they all split up to explore the house. "It'll be fun." he says. They pair up into boy-girl twosomes and begin looking around the decrepit house leaving the nerdy guy alone ... with a flashlight that works ... intermittently.

The nerdy guy hears a noise from down a darkened hallway. "Hey Johnny ". is that you?" the nerdy guy calls out. Having never seen a horror film in his entire life, the nerdy guy actually starts walking down the long dark hallway. And his flashlight goes out. He bangs it a few times and it comes back on ... then it flickers out. He hears the noise again ... closer ...

"Aw c'mon you guys " this isn't funny anymore." says the nerdy guy. He hits the flashlight again ... the light flares up ... and there is ... The Thing in The Old Dark House ... that immediately rips the nerdy guy to pieces. The dropped flashlight illuminates the blood and gore splashing the walls because this is an "R" rated movie after all.

I don't know how many horror movies you've seen, but I have watched that scene play out over and over again in countless not-very-good movies. And regardless of what any of my teachers said, from the elementary school nuns, the priests in high school, or the academics I knew in college, Horror movies didn't rot my brain or waste my time. I learned from them. I learned about monsters. So did you.

We know when the nerdy guy slowly walks down that long dark hallway that he will be The First Victim. And one by one, except for one survivor, the band of teenagers is doomed. But the survivor will be the first one to die ... in the sequel.

Some 45 years ago I became aware of the fact that the government of The United States was trying to kill me. I wasn't paranoid or anything. I mean I knew the government wasn't out to kill me personally. They just wanted to kill as many Vietnamese (more...)
Related Topic(s): Evil; Horror; Monsters; Republican, Add Tags
Add to My Group(s)
Go To Commenting
The views expressed herein are the sole responsibility of the author and do not necessarily reflect those of this website or its editors.