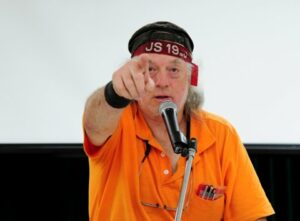 Brian Willson
(Image by WorldBeyondWar.org)   Details   DMCA
Premiering around the end of March will be one of the best films I've ever seen on peace activism: Paying the Price for Peace produced by Bo Boudart and others. The film focuses on S. Brian Willson while also informing the viewer on the state of U.S. warmaking and what can be done about it.

This is a story of courageous sacrifice, dedication, excitement, adventure, solidarity, and a service truly worthy of thanking the story's hero for. If you're imagining that war will give your life meaning, take a look at this film and see what trying to end war could do for you.

If you dislike war or poverty or environmental destruction, take a look at this film for examples of how we can all do more to make the world better. The film inspires, rather than shaming. But it inspires with examples that many find difficult to emulate.

"You have to be willing to risk life, limb, and prison," Willson says in the film. "Then you're free."

I recently read a comment from someone urging others not to protest at Trump rallies, for fear someone would be killed. History does not repeat, and comparisons are always strained, but would it have been good advice not to protest Adolf Hitler's first rally? Because someone might get killed? Doesn't that now sound ridiculous? Don't we have a moral duty to protest all of these candidates who support the bombing of human beings in distant lands?

If that sounds outrageous, you should really, really see Paying the Price for Peace.

Brian Willson "served" in the U.S. military in Vietnam. His job was to assess the success or failure of bombing missions. He was literally sent to examine the damage. Frequently, what he found were undefended fishing villages that had been bombed with 500 lb. bombs from not very high up, and then napalmed. He found burned bodies, sometimes in such heaps he couldn't get over them.

Here was a good kid, star athlete, high school valedictorian, doing what he'd been told, thinking as he'd been carefully taught to think. And he concluded that war and a great many other things were fundamentally lies. He came back to the United States ready to search for and promote other ways of living. He's been doing so ever since and will likely keep doing so for years to come, much to our benefit.

In the movie, we see Willson's decades of travels, protests, talks, demonstrations, fastings, and bicycling tours. We see him leading by example in his personal life, living peacefully and in an environmentally sustainable manner. We also see how passionately he and others have risked everything.

During protests of the war on Vietnam shown in the film, a veteran says, "If the American people sit down and just hold their fingers up and say 'peace,' they don't deserve any better than Agnew or Nixon or the rest of the people they've got here, because they're doing nothing and they're as guilty as anyone who pulled the trigger in Vietnam."

Well, what should we do? The film is packed with ideas, and shows them to us in action. When Ronald Reagan's Contras were massacring civilians, Brian Willson and many others from the United States, at serious risk to themselves, went to Nicaragua and walked through the war zone observing and recording -- and speaking against U.S. policy. 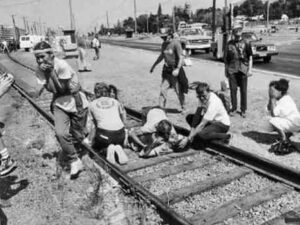 Brian Willson
(Image by WorldBeyondWar.org)   Details   DMCA
Most famously, Willson and others sat on train tracks in California to prevent the shipment of weapons bound for Latin America. The military train intentionally sped up and ran Willson over. It was a risk he'd been aware of and been willing to take. He lost the lower portion of both of his legs. Others, during the protests of those weapons shipments, had limbs broken by police or were locked up for months. Willson's injury didn't slow him down.

When he traveled abroad after that horrific crime, people in places like Nicaragua saw him as a Yankee who had paid the price that they pay when they challenge abusive powers. Willson's actions were actions of solidarity as well as resistance, and were understood as such.

The film shows us others who have risked or paid similar prices, and others who have done small bits in the same direction (I'm in the film briefly). Included are Occupy activists facing (militarized) police violence, and whistleblowers facing prison. Daniel Ellsberg says in the film that we also need people who will risk their reelections. Indeed.

And we need more Brian Willsons. But we are quite fortunate to have the one we have. Here's a veteran who cares about veterans but keeps matters in proper perspective, caring also about the vast majority of victims of U.S. wars. If the victims of the Vietnam War were all listed on the memorial in Washington, D.C., Willson says, it would stretch at least as far as from its current location to the base of the Washington Monument.

David Swanson is the author of "When the World Outlawed War," "War Is A Lie" and "Daybreak: Undoing the Imperial Presidency and Forming a More Perfect Union." He blogs at http://davidswanson.org and http://warisacrime.org and works for the online (more...)
Related Topic(s): Peace; Peace, Add Tags
Add to My Group(s)
Go To Commenting
The views expressed herein are the sole responsibility of the author and do not necessarily reflect those of this website or its editors.