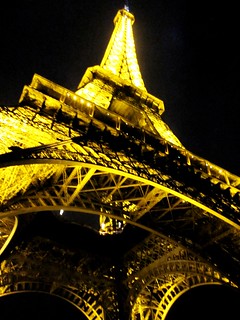 The Eiffel Tower in Paris lights up.
(Image by Oh Paris)   Details   DMCA
>

The charade of the 21st United Nations climate summit will end, as past climate summits have ended, with lofty rhetoric and ineffectual cosmetic reforms. Since the first summit more than 20 years ago, carbon dioxide emissions have soared. Placing faith in our political and economic elites, who have mastered the arts of duplicity and propaganda on behalf of corporate power, is the triumph of hope over experience. There are only a few ways left to deal honestly with climate change: sustained civil disobedience that disrupts the machinery of exploitation; preparing for the inevitable dislocations and catastrophes that will come from irreversible rising temperatures; and cutting our personal carbon footprints, which means drastically reducing our consumption, particularly of animal products.

"Our civilization," Dr. Richard Oppenlander writes in "Food Choice and Sustainability, "displays a curious instinct when confronted with a problem related to overconsumption -- we simply find a way to produce more of what it is we are consuming, instead of limiting or stopping that consumption."

The global elites have no intention of interfering with the profits, or ending government subsidies, for the fossil fuel industry and the extraction industries. They will not curtail extraction or impose hefty carbon taxes to keep fossil fuels in the ground. They will not limit the overconsumption that is the engine of global capitalism. They act as if the greatest contributor of greenhouse gases -- the animal agriculture industry -- does not exist. They siphon off trillions of dollars and employ scientific and technical expertise -- expertise that should be directed toward preparing for environmental catastrophe and investing in renewable energy -- to wage endless wars in the Middle East.

What they airily hold out as a distant solution to the crisis -- wind turbines and solar panels -- is, as the scientist James Lovelock says, the equivalent of 18th-century doctors attempting to cure serious diseases with leeches and mercury. And as the elites mouth platitudes about saving the climate they are shoving still another trade agreement, the Trans-Pacific Partnership (TPP), down our throats. The TPP permits corporations to ignore nonbinding climate accords made at conferences such as the one in Paris, and it allows them, in secret trade tribunals, to defy environmental regulations imposed by individual states.

New technology -- fracking, fuel-efficient vehicles or genetically modified food -- is not about curbing overconsumption or conserving resources. It is about ensuring that consumption continues at unsustainable levels. Technological innovation, employed to build systems of greater and greater complexity, has fragmented society into cadres of specialists. The expertise of each of these specialists is limited to a small section of the elaborate technological, scientific and bureaucratic machinery that drives corporate capitalism forward -- much as in the specialized bureaucratic machinery that defined the genocide carried out by the Nazis. These technocrats are part of the massive, unthinking hive that makes any system work, even a system of death. They lack the intellectual and moral capacity to question the doomsday machine spawned by global capitalism. And they are in control.

Civilizations careening toward collapse create ever more complex structures, and more intricate specialization, to exploit diminishing resources. But eventually the resources are destroyed or exhausted. The systems and technologies designed to exploit these resources become useless. Economists call such a phenomenon the "Jevons paradox." The result is systems collapse.

In the wake of collapses, as evidenced throughout history, societies fragment politically, culturally and socially. They become failed states, bleak and desolate outposts where law and order break down, and there is a mad and often violent scramble for the basic necessities of life. Barbarism reigns.

"Only the strong survive; the weak are victimized, robbed, and killed," the anthropologist Joseph Tainter writes in "The Collapse of Complex Societies." "There is fighting for food and fuel. Whatever central authority remains lacks the resources to reimpose order. Bands of pitiful, maimed survivors scavenge among the ruins of grandeur. Grass grows in the streets. There is no higher goal than survival."

The elites, trained in business schools and managerial programs not to solve real problems but to maintain at any cost the systems of global capitalism, profit personally from the assault. They amass inconceivable sums of wealth while their victims, the underclasses around the globe, are thrust into increasing distress from global warming, poverty and societal breakdown. The apparatus of government, seized by this corporate cabal, is hostile to genuine change. It passes laws, as it did for Denton, Texas, after residents voted to outlaw fracking in their city, to overturn the ability of local communities to control their own resources. It persecutes dissidents, along with environmental and animal rights activists, who try to halt the insanity. The elites don't work for us. They don't work for the planet. They orchestrate the gaiacide. And they are well paid for it.

The Anthropocene Age -- the age of humans, which has caused mass extinctions of plant and animal species and the pollution of the soil, air and oceans -- is upon us. The pace of destruction is accelerating. Climate scientists say that sea levels, for example, are rising three times faster than predicted and that the Arctic ice is vanishing at rates that were unforeseen. "If carbon dioxide concentrations reach 550 ppm," writes Clive Hamilton in "Requiem for a Species," "after which emissions fell to zero, the global temperature would continue to rise for at least another century." We have already passed 400 parts per million, a figure not seen on earth for 3 million to 5 million years. We are on track to reach at least 550 ppm by 2100.

The breakdown of the planet, many predict, will be nonlinear, meaning that various systems that sustain life -- as Tainter chronicles in his study of collapsed civilizations -- will disintegrate simultaneously. The infrastructures that distribute food, supply our energy, ensure our security, produce and transport our baffling array of products, and maintain law and order will crumble at once. It won't be much fun: Soaring temperatures. Submerged island states and coastal cities. Mass migrations. Species extinction. Monster storms. Droughts. Famines. Declining crop yields. And a security and surveillance apparatus, along with militarized police, that will employ harsher and harsher methods to cope with the chaos.

We have to let go of our relentless positivism, our absurd mania for hope, and face the bleakness of reality before us. To resist means to acknowledge that we are living in a world already heavily damaged by global warming. It means refusing to participate in the destruction of the planet. It means noncooperation with authority. It means defying in every way possible consumer capitalism, militarism and imperialism. It means adjusting our lifestyle, including what we eat, to thwart the forces bent upon our annihilation.

The animal agriculture industry has, in a staggering act of near total censorship, managed to stifle public discussion about the industry's complicity in global warming. It is barely mentioned in climate summits. Yet livestock and their byproducts, as Kip Andersen and Keegan Kuhn point out in their book, "The Sustainability Secret," and their documentary, "Cowspiracy," account for at least 32,000 million tons of carbon dioxide (CO2) per year, or 51 percent of all worldwide greenhouse gas emissions. Methane and nitrous oxide are rarely mentioned in climate talks, although those two greenhouse gases are, as the authors point out, respectively, 86 times and 296 times more destructive than carbon dioxide. Cattle, worldwide, they write, produce 150 billion gallons of methane daily. And 65 percent of the nitrous oxide produced by human-related activities is caused by the animal agriculture industry. Water used in fracking, they write, ranges from 70 billion to 140 billion gallons annually. Animal agriculture water consumption, the book notes, ranges from 34 trillion to 76 trillion gallons annually. Raising animals for human consumption takes up to 45 percent of the planet's land. Ninety-one percent of the deforestation of the Amazon rain forest and up to 80 percent of global rain forest loss are caused by clearing land for the grazing of livestock and growing feed crops for meat and dairy animals. As more and more rain forest disappears, the planet loses one of its primary means to safely sequester carbon dioxide. The animal agriculture industry is, as Andersen and Kuhn write, also a principal cause of species extinction and the creation of more than 95,000 square miles of nitrogen-flooded dead zones in the oceans.

A person who eats a vegan diet, they point out, a diet free of meat, dairy and eggs, saves 1,100 gallons of water, 45 pounds of grain, 30 square feet of forested land, 20 pounds CO2 equivalent, and one animal's life every day.

The animal agriculture industry has pushed through "Ag-Gag" laws in many states that criminalize protests, critiques of the industry, and whistleblowing attempts to bring the public's attention to the staggering destruction wrought on the environment by the business of raising 70 billion land animals every year worldwide to be exploited and consumed by humans. And they have done so, I presume, because defying the animal agriculture industry is as easy as deciding not to put animal products -- which have tremendous, scientifically proven health risks -- into your mouth.

Related Topic(s): Agriculture; Capitalism Over Humanity; Climate; Food; Fracking; Methane, Add Tags
Add to My Group(s)
Go To Commenting
The views expressed herein are the sole responsibility of the author and do not necessarily reflect those of this website or its editors.