AS the election has drawn to a close, those on the left are in deep misery. We voted for Stein, or in some cases, chose not to vote (because not voting is the best way to rid elections of fraud.....or some argue) but we know that as proud as we are to have supported such an intelligent and honest person, that the media and public will hardly notice our votes. In 2012, I voted for Stein, who got her largest vote in my state Cali, but the next day, the media did not even report her vote totals. Our protest vote led to oblivion......in the media, but especially the young, who are being dealt out of the dying American dream, are looking for alternatives.

I have voted for Stein again because we have reached a tipping point, of which the renewed interest in anti-establishment concepts like anarchism are looking attractive to many. The problem is that anararchism

is a term so abused that it means, to one, a hippie commune and to another, bomb throwers. I try to define anarchism, provide a historical and philosophical context that places its evolution at the heart of the Left, which up until Bernie Sanders, was Left Out.

And that is the condition of the Left today...it doesn't exist except among a minority of writers and other deviants. The Republican Party is totally taken over by the far right, going as far as to deny science, and the triangulated Democratic Party, which went center right under Bill Clinton (and Hillary is no different) as he joined with the Republicans to repeal Glass-Steagall. 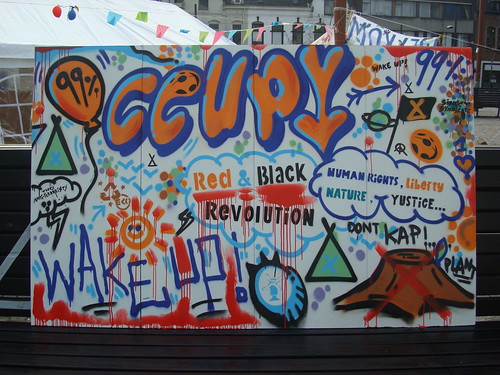 Glass-Steagall " was passed by Congress in 1933 and prohibits commercial banks from engaging in the investment business. It was enacted as an emergency response to the failure of nearly 5,000 banks during the Great Depression."

In 1999 Congress passed the Gramm--Leach--Bliley Act, also known as the Financial Services Modernization Act of 1999, which repealed its key provisions of barring commercial banks from being investment/casino banks. Bill Clinton signed this bill, co-sponsored by 3 Republicans and with a Republican House and Senate, as it was veto proof.

Today, both Democrat, Republicans, and the public want to re-instate the wall of separation, which prevents reckless gambling at the public's risk.

Trump's first choice for Secretary of the Treasury, Jaimi Dimon, is the billionaire CEO of the largest bank, JPMorganChase, and he is strongly opposed to bring back the Glass-Steagall separation. f*ck everybody! Wall St. rules. Such attitudes are birthing a new interests in anarchism.

And so our next President will be a pathological billionaire pretending to be a populist, whose singular talent is showmanship and whose moral compass is so damaged that he started his campaign by appealing to the declining white poorly educated, offering them a scapegoat for the suffering that oligarchs like Trump, who has outsourced 95% of his jobs to slave labor states, has actually caused. This is somewhat like Hitler pretending to be a "socialist" as he sent the socialists, trade union leaders, and Social Democrats to die at Dachau. Trump will give us peace by choosing the Bush war team, on record of wanting to "Bomb Iran (see John Bolton, possible Secy of State, in his NYTimes op ed from last year).

And he will dismantle the oligarchy by having Wall St cut its own throat.

Related Topic(s): Alternative; Anarchism; Anarchists; Anarchy Anarchism; Election; Escape; Freedom; Philosophy; Power; Psychopath; (more...) Socialism; Socialism; Spiritual, Add Tags  (less...)
Add to My Group(s)
Go To Commenting
The views expressed herein are the sole responsibility of the author and do not necessarily reflect those of this website or its editors.