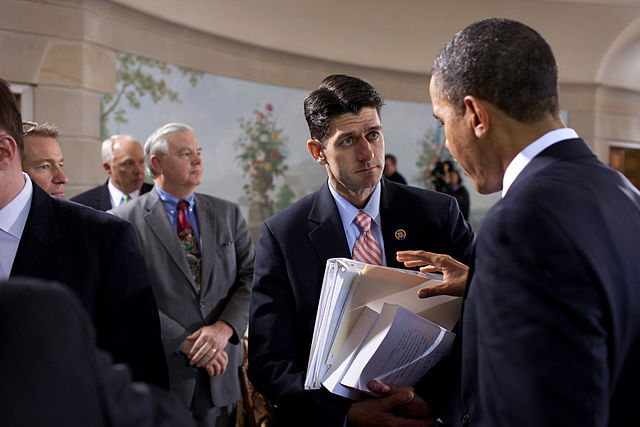 I was just gobsmacked when I heard you use the phrase "The People's House" in your scolding of the Democrats after their gun control sit-in. Although, I took it as a minor miracle you didn't immediately choke on your words or that lightning didn't strike any where near you. Granted, I didn't check the D.C weather reports for that day, so it's possible the latter happened.

How, I wondered, were you able to utter the phrase, "The People's House," especially after criticizing Democrats for doing a sit-in because they wanted to debate what were, after all, fairly mild gun safety regulations with which the majority of Americans agree.

According to a CBS News poll taken after Orlando, 57% of Americans now support a ban on assault weapons, a much more substantive proposal than anything the House Democrats were putting forth. One bill the Democrats wanted to debate was universal background checks, which a super majority of 89% of Americans support, including substantial majorities of Democrats and Republicans.

How can you call it "The People's House" when no debate is allowed over what the vast majority of people want? To call the present Republican House "The People's House" makes a mockery of the term. As Sean Illing pointed out in Salon in 2015, " the GOP's control of Congress is . . . a scandal." Obama beat Republican candidates twice "with more than 50 percent of the popular vote." Also, "Democratic congressional candidates received 1.4 million more votes than their Republican opponents in 2012. And yet Republicans lost only eight seats that year. In a remotely representative system, such results would not be possible."

So what has happened in the world's last best hope? Your party, fueled by dark money, was extraordinarily successful at rigging the system in its favor by gerrymandering at the state level.

And how did your party do that? "They've used advanced technology and algorithms based on the most recent census data to redraw borders and create the safest districts possible." So because of your party's rigging of the system, its influence in Congress is much greater than its support among the actual people of America.

Another more interesting way to say it is that all of us have collectively been ratf**ked as Salon editor-in-chief David Daley puts it in his provocatively titled new book, RatF**ked: The True Story Behind The Secret Plan To Steal America's Democracy. Daley points out that because of your party's successful effort to subvert our democracy, blue states like Ohio and Pennsylvania that voted for Obama end up sending super majorities of Republicans to Congress, all because of gerrymandering. In Ohio's case, Republicans have a 12-4 advantage and Pennsylvania's delegation is 13-5 Republican.

Of course, your party was only able to pull off this little coup because of dark money. In fact, if it weren't for a handful of right-wing billionaires, the Kochs, the Scaifes, the DeVoses, and a few others, your party's hard right turn over the past few years would never have been possible. They bought off media and universities. They established think tanks and a 24-7 365-days-a-year campaign mode that has transformed our nation for the worse.

As described by Jane Mayer in her well-researched Dark Money: The Hidden History of the Billionaires Behind the Rise of the Radical Right , the present-Majority Leader Mitch McConnell once explained to a college class that there are only three ingredients to building a political party: money, money, and money. So according to your counterpart in the Senate, such quaint notions as the people's will or the common good are not ingredients in building a political party. Good to know.

After years and years of your party filling its coffers with dark money, while doing nothing, being the Party of No, you have the gall to lecture those who want to do the people's business. And to add insult to injury, you call your bought-and-paid-for House, "The People's House."

Given all the above, I don't know whether to call your utterance of the phrase "The People's House" chutzpah, delusional thinking, the meaningless mouthing of political platitudes, or just politics as usual as practiced in the second decade of the 21st century? Yet no matter what I call it, the people, whose well-being should be the primary objective of "The People's House," will continue to be the losers.

I blog at "Left-Wing Tex" from beautiful Fort Worth, Texas. Here I am a retired English-as-a-Second Language teacher. I have had poems published in a number of venues, including California Quarterly, Borderlands, The Texas (more...)

Related Topic(s): Dark Money; Democratic Sit-in; Gerrymandering; Orlando Shooting, Add Tags
Add to My Group(s)
Go To Commenting
The views expressed herein are the sole responsibility of the author and do not necessarily reflect those of this website or its editors.

Believe it or Not, Trump is Not Our Main Problem

Dating in Your Sixties or Beware of Crazy Greek Psychotherapists!

The G(OP)rinch that Stole Democracy

2020: Welcome to Dystopian America: Like Us, But Only Worse