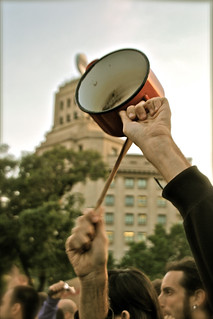 "Volatile" seems to be the adjective of choice for pollsters going into the Dec. 20 Spanish elections, a balloting that will likely not only change the face of politics in the European Union's (EU) fifth largest economy, but one that will have reverberations throughout the 28-nation organization. Long dominated by two parties -- the rightwing People's Party (PP) and the center-left Socialist Workers Party -- the political landscape has atomized over the past two years. "For the first time in general elections in Spain," says Manuel Mostaza Barros of Sigma Dos poll, "We have four parties polling above 15 percent when it comes to voter intentions."

What levers those voters pull is very much up for grabs. Polls indicate that 41 percent of the electorate has yet to make up their minds. But whatever party ends up on top, it will have to go into a coalition, thus ending the reign of the two-party system that has dominated the country since the death of fascist dictator Francisco Franco in 1975.

The latest polls indicate that the rightwing PP will take a beating, dropping from the 44 percent that it won four years ago to around 28 percent, but it will still win the largest number of votes of any one party. Behind the PP are the Socialists, with close to 21 percent, followed by the center-right Ciudadanos Party at 19 percent, and the left-wing Podemos Party at 15.7 percent.

However, with a chunk of the voters yet to make up their minds, "These are the most volatile elections of recent years," says pollster Mostanza. Pablo Iglesias of Podemos says, "We're expecting a bumpy ride with political turbulence."

Spain is just beginning to emerge from five years of draconian austerity that drove the national jobless rate to 27 percent, and above 50 percent in the country's south and among its young people. While growth has finally returned, unemployment is still 22 percent, and far higher for those under 35. The gap between rich and poor has sharply widened, and many workers have lost their modest state support, because they have been jobless for more than two years.

The PP's Prime Minister Mariano Rajoy has been campaigning on a program of "stay the course because things are improving." The Party's slogan is "Espana, en serio" ("Spain, seriously"). Opponents have added a question mark to the end of that sentence.

It is true that Spain's economy is growing -- 3.1 percent in 2015, and projections for 2.7 percent in 2016 -- but the austerity program had little to do with that turnaround. The fall in the euro's value has lifted Spain's export industries, and the precipitous drop of world oil prices -- from $114 in 2014 to $35 today -- are the major reasons Spain has clawed its way out of recession.

Spain's woes began with the American banking crisis of 2007-08, which crashed Spain's vast real estate bubble and threatened to bring down its financial system. At the time, Spain had a budget surplus and a modest debt, but speculators drove borrowing rates so high that the country found itself on the edge of default.

Conn M. Hallinan is a columnist for Foreign Policy In Focus, "A Think Tank Without Walls, and an independent journalist. He holds a PhD in Anthropology from the University of California, Berkeley. He oversaw the (more...)
Related Topic(s): Elections; GrassRoots; Parties; Podemos; Spanish, Add Tags
Add to My Group(s)
Go To Commenting
The views expressed herein are the sole responsibility of the author and do not necessarily reflect those of this website or its editors.