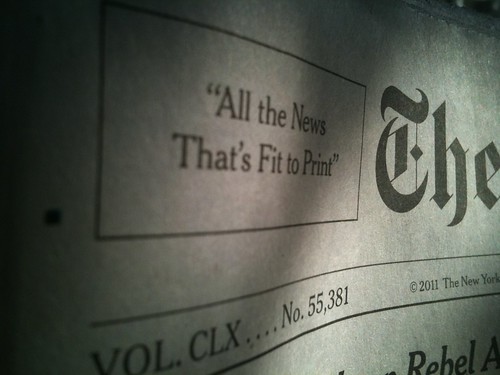 There was a time a free press existed in America, acting as was intended under its 1st Amendment right granted under the Constitution. It was skeptical of the government, did real investigative reporting and was unafraid of exposing government wrongdoing.

The time in mind was the early 1970's with the Washington Post's exposing the Nixon administration's "Watergate" conspiracy, unraveling the affair that eventually made Nixon resign in disgrace.

Of course that's ancient history now as the Washington Post has betrayed its honored history becoming nothing more than a war mongering neo-con propaganda rag and "regime change" booster.

Unfortunately it's not just the Post. This is not a new revelation but bears repeating; the entire corporate owned supposed free press MSM in America has become an "unofficial" organ of the state masquerading as a free press under the banner of the Constitution in effect shredding the document acting as a complicit handmaiden of the state.

There is no investigative reporting. Assertions made by the government are not checked for validity. Everything related by the government is accepted as a given then regurgitated verbatim by the MSM to the people. That certainly wasn't what Jefferson had in mind when he said, "an informed citizenry is the best defense against tyranny of the government." Or for that matter Franklin's admonition "...a republic if we can keep it".

The New York Times essentially the nations newspaper hardly represents the slogan on its masthead, "All the news that's fit to print". That's a cruel joke. Check out a few recent articles [1] by investigative reporter Robert Parry who reveals the Times' descent into a tool for disinformation, misinformation, unsubstantiated conclusions based on faulty evidence, engaging in absolute falsehoods and misleading the public.

The Times' continues to reference opponents to President Bashar Assad's regime in Syria as "moderates". There are no "moderates". They're nothing more than foreign proxy, mercenary jihadists trained by the CIA, supplied with US arms, paid by Saudi Arabia, Qatar and other GCC countries and funneled through Turkey and Jordan into Syria. Whatever indigenous, Syrian "Arab Spring" opponents of Assad that may have initially existed in 2011 have long since been co-opted and joined with al Nusra terrorists. Meanwhile Assad's Syrian Arab Army in coordination with Hezbollah and Iranian fighters supported by the Russian and Syrian air force are taking on these terrorists in East Aleppo and may soon be victorious. Though the Times' refers to the siege of eastern Aleppo as the Russians and the Syrian air forces destroying hospitals and killing innocents. That's what's reported by the supposed humanitarian "White Helmets" who are nothing more than a western, corporate funded, armed group of play actors in Eastern Aleppo embedded with the terrorists staging atrocities then blame it all on Russian and Syrian bombing. Check out independent investigative journalist Vanessa Beeley [2] who reveals the true nature of the "white helmets".

The point being: what the American people are receiving from their government and the corporate MSM is propaganda. Assertions are made, conclusions drawn with no factual evidence presented. When evidence comes forth reported in the alternative media which conflicts with the "official" story it's simply ignored. It's history. Whether it's 9/11, authorizing torture, drone assassinations, CIA initiated coups of legitimate foreign governments dressed up as the peoples asserting themselves and overthrowing a corrupt leader as Iran in 1953 and Chile in 1972. Meanwhile people in Crimea seeing the coups in Kiev in February 2014 legitimately calling for a referendum to secede from Ukraine and join the Russian federation is portrayed by the US and MSM as an illegal Russian takeover.

So if the people are misinformed, presented distortions of events, falsehoods and lies by the government and the MSM there is no longer an "informed citizenry". It's a citizenry that's been fed endless propaganda, indoctrinated and made fearful of terrorists and terrorism in the governments endless war on terror..

And now here we are subjected to another presidential election campaign extravaganza, the two major party candidates hated, 3rd party candidates prevented from participating in the debates which are strictly controlled by the Democratic and Republican National Committees, leaks of collusion between the Clinton campaign and the Democratic National Committee preventing any possibility of Bernie Sanders becoming the Democratic nominee while untold millions in dark money flood the entire political process as a result of SCOTUS ruling in favor of Citizens United in 2010 with Justice Anthony Kennedy presenting the majority opinion stating "We now conclude that independent expenditures, including those made by corporations, do not give rise to corruption or the appearance of corruption".

"Citizens" is probably the most outrageous SCOTUS ruling since the Plessy vs. Ferguson "separate but equal" ruling in 1896 upholding racial segregation laws for public facilities. That ruling stood until it was overturned in SCOTUS 1954 Brown vs. Board of Education ruling outlawing segregated schools.

Will it take 50 odd years to overturn Citizens? If so it'll take more than god to help us.

Retired. The author of "DECEIT AND EXCESS IN AMERICA, HOW THE MONEYED INTERESTS HAVE STOLEN AMERICA AND HOW WE CAN GET IT BACK", Authorhouse, 2009
Related Topic(s): Corruption; Disinformation; Government; News And Media; Newspapers; Propaganda; Tyranny, Add Tags
Add to My Group(s)
Go To Commenting
The views expressed herein are the sole responsibility of the author and do not necessarily reflect those of this website or its editors.