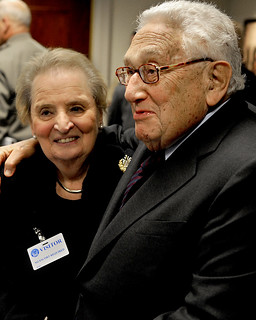 This past week's campaign for the Democratic Party presidential nomination reveals that Hillary Clinton not only has good friends on Wall Street who pay her hundreds of thousands of dollars for speeches but also some good friends who have served as loyal servants of the U.S. national-security establishment.

At a campaign event last Saturday in New Hampshire, Madeleine Albright, who Clinton brought to New Hampshire to help her faltering campaign in that state, told people that "there is a special place in hell for women who don't help" Hillary Clinton become president.

That's funny because that is precisely how people in the Middle East felt about Albright during her time as U.S. Ambassador to the United Nations in Bill Clinton's administration. They felt that there was a special place in hell reserved for Albright for what she said about the Iraqi children that she, the president, and the U.S. national-security establishment were killing with the deadly sanctions that the U.S. government was enforcing against Iraq.

During her time as UN ambassador, Albright was interviewed by Sixty Minutes about the system of sanctions that the United Nations, owing to the instigation of the U.S. government, was enforcing against Iraq. Albright was asked whether the deaths of half-a-million Iraqi children from the sanctions were worth it. Albright responded that while the decision was a difficult one, yes, the deaths were nonetheless "worth it."

When Ramzi Yousef was being sentenced for his role in the 1993 terrorist attack on the World Trade Center, he cited the brutal sanctions against Iraq -- butchery, as he called it -- as one of the principal motivating factors that induced him to retaliate against the United States with terrorism.

The continuous horror produced by the sanctions on Iraq -- 11 years of death and economic destruction of Iraq's middle class -- were also a major motivating factor for subsequent acts of terrorism against the United States, including the attacks on the USS Cole, the U.S. embassies in Kenya and Tanzania, the 9/11 attacks, the Ft. Hood killing spree, the attempted shoe bombing of a plane headed to Detroit, and others.

It wasn't just Iraqis who were deeply angry over the killing of the Iraqi children and the utter callousness displayed by Albright and the rest of the Clinton administration to the deaths of those Iraqi children. Two high UN officials, Denis Halliday and Hans von Sponek, resigned their positions in protest to what they called genocide being brought to Iraq by the UN and the U.S. government.

This is what all the presidential candidates -- Republican and Democrat alike, together with many of their enthusiastic supporters -- just don't get. They've convinced themselves that the problem is with Muslims, the Koran, Islam, and burqas rather than with their very own government, which has essentially become their god. They just can't comprehend that people get angry when children are intentionally killed, even Arab children, even Muslim children. And since they just don't get it, all they want to do is just keep bombing and killing, bombing and killing, and bombing and killing. I'll bet you that they would get it if hundreds of thousands of American children were being killed by Iraqi or Iranian sanctions.

One thing to remember is that there is was nothing anyone could do about the sanctions. The embargo operated as a total blockade of Iraq, preventing the country from exporting any its oil and from importing goods without the express permission of U.S. bureaucrats. (See Invisible War: The United States and the Iraq Sanctions by Joy Gordon or "Cool War: Economic Sanctions as a Weapon of Mass Destruction" by Joy Gordon.)

The Iraqi armed forces lacked the ability to break free of the blockade and if they tried, they would have been subjected to another massive U.S. bombing campaign that would have killed even more Iraqis and destroyed even more of the country. Meanwhile children were dying and the Iraqi people were losing their life savings. There were only two things that angry people in the Middle East could do: passively accept the death and destruction or retaliate with acts of terrorism.

Here at FFF, we were publishing articles before the 9/11 attacks warning Americans that if the U.S. government persisted in this misconduct, Americans would ultimately see a major act of retaliatory terrorism on American soil. We weren't the only ones. That's what Chalmers Johnson said in his pre-9/11 book Blowback: The Costs and Consequences of American Empire, a book I still highly recommend, along with Johnson's other two books: The Sorrows of Empire: Militarism, Secrecy, and the End of the Republic and Nemesis: The Last Days of the American Republic.

Of course, apologists of the U.S. national-security state and proponents of foreign interventionism and regime change attacked us libertarians as being "unpatriotic" for daring to speak out against the sanctions, the death and destruction, and the foreign interventionism. That's because they define patriotism as the unconditional loyal support of a nation's national-security establishment.

We saw this phenomenon especially after the 9/11 attacks when defenders of U.S. interventionism, militarism, and empire were saying that the attacks were motivated by hatred for America's "freedom and values," acting as though the murder of hundreds of thousands of innocent Iraqi children had nothing to do with it, and attacking us libertarians for pointing out that the attacks were the direct retaliatory consequence of U.S. interventionism in the Middle East.

One of the reasons the sanctions were so deadly related to how the Pentagon decided to wage war on Iraq in the Persian Gulf War. The Pentagon had conducted a study over what the consequences would be if U.S. bombers were to destroy Iraq's water and sewage treatment plants. The study concluded that doing so would produce massive loss of life from people drinking sewage-infested water. So, the Pentagon delivered the order to its bombers: Destroy the plants, an order that U.S. pilots dutifully obeyed.

Then, the sanctions prevented the Iraqis, year and year, from acquiring the parts and equipment to repair those water-and-sewage treatment plants, which thereby confirmed the validity of the Pentagon study. When Albright told "Sixty Minutes" that the deaths of those half-a-million Iraqi children were "worth it," that was in 1996. The sanctions remained in place for another five years.

Related Topic(s): Children; Hillary Clinton; Madeline Albright; People Henry Kissinger; Shame, Add Tags
Add to My Group(s)
Go To Commenting
The views expressed herein are the sole responsibility of the author and do not necessarily reflect those of this website or its editors.