Washington, DC -- "Don't we want our presidential candidates to be well informed about fellow Americans?" Instead of worrying about their misunderstandings about American Muslims and Islam, Mike Ghouse has offered free consulting services to Dr. Ben Carson, and now he extends the same to Donald Trump.

Ghouse adds, "I hope the statements they make can square with the U.S. Constitution and common sense, and hopefully gain respect from fellow Americans who are Muslims, Mexicans and others. Hilary Clinton and Bernie Sanders are welcome to access free counseling as well." 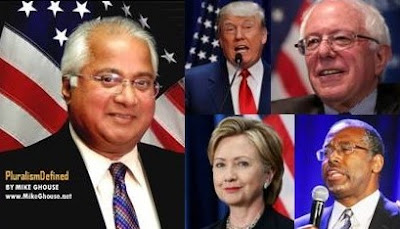 Copyrighted Image? DMCA
"As American Muslims we uphold, protect, defend and celebrate the values enshrined in our Constitution. Our faith reinforces the idea of one nation under God, indivisible with liberty and justice for all," Ghouse has written.

Since 9/11, talk show hosts, journalists, lawmakers, and thought leaders have asked, "Where are the moderate Muslims to join the debate on social, civic, religious and political issues, including racism and violent extremism?"

"Over and over you hear it said: If Muslims oppose terrorism, why don't they stand up and say it? If that has been you, Mike Ghouse ought to be your hero," according the Steve Blow, a columnist with the Dallas Morning News (Dallas Morning News ).

Dr. Ghouse defines "moderate Muslim" as someone who respects the otherness of others and accepts the God-given uniqueness of each person in God's creation. He has published more than 1000 articles on diverse aspects of Islam and maintains a blog on Quran, Sharia, Blasphemy, Apostasy, Hijab, Reforms, Ramadan, Women's issues and community relations. He is driven by the pluralistic wisdom in Quran, and his mission is authenticated by many a verse from Quran.

Dr. Mike Mohamed Ghouse has recently moved to Washington, D.C ., and has undertaken to speak up where there is public debate about Islam. He is a proud, unapologetic Moderate Muslim and a passionate advocate of pluralism in religion, society, politics, race, culture, food and governance. He is a public speaker, thinker, writer and a commentator on pluralism and interfaith relations in America, and offers pluralistic solutions on issues of the day.

"The Voice of Moderate Islam in America" at www.TheGhouseDiary.com. Link for the article at:http://theghousediary.blogspot.com/2015/10/the-voice-of-moderate-islam-in-america.html