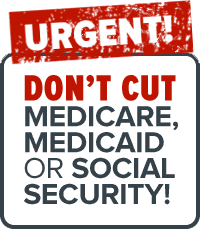 It's not often that I find myself agreeing with a congressional Republican on fiscal matters, but it's hard to argue with a recent statement from Rep. Rob Woodall (R-Ga.) of the House Budget Committee. "A budget is a moral document," said the Georgia Republican. "It talks about where your values are."

That's certainly true. So what are we to make of this year's House and Senate Republican budgets? They harm seniors, use the disabled as pawns, punish the needy, pamper the wealthy, and employ deceit -- all to promote a selfish agenda for the wealthy and powerful.

There's a lot to say about these two proposals, but for now we'll restrict ourselves to two important subjects: Social Security and Medicare.

These statements are false and alarmist. The Social Security Trust Fund currently holds $2.8 trillion in assets, in the form of legally binding debt from the U.S. Treasury. (And a word to conservatives: don't tell us that this debt is comprised of "just IOUs" -- not unless you're prepared to say that your own Treasury bonds are "just IOUs" too.)

Under current projections, and with no changes to the program, Social Security will be able to pay full benefits until the mid-2030s. Even then it will be able to pay three-quarters of benefits, since it will continue to collect revenue every year. That is neither "insolvency" nor "bankruptcy" as those words are commonly understood.

To add an extra frisson of panic, the Republicans continue to oppose rebalancing the retirement and disability trust funds to ensure that disabled Americans continue to receive full benefits. That adjustment, which Congresses led by both parties have made 11 times in the past, is quite minor. But the Republicans are eager to provoke a needless crisis to promote their agenda, even if it means using the disabled as pawns.

Here's another fact these GOP budgets conveniently fail to mention: That future shortfall is easily remedied through such measures as lifting the "payroll tax cap" for high and extremely high earners, imposing a financial transaction tax on Wall Street, and increasing the average American's payroll tax by literally a few dollars a month.

Polls show that these solutions are popular with voters. In fact, large majorities of Republicans, as well as Democrats and independents, support using a tax-the-rich approach to fund an expansion of Social Security benefits. That makes sense, since growing wealth inequality and the collapse of other retirement vehicles has left most Americans facing financial insecurity in their retirement.

Having raised their false alarms, the Republicans are surprisingly diffident about following them to their logical conclusion: benefit cuts. No wonder -- the idea is enormously unpopular with voters. Instead of pitching that, Republicans take a page from the "grand bargain" and "bipartisan" talk of years past.

"Truly what's needed is a long-term solution to the problems facing Social Security," says the House document. "One such proposal would be a bipartisan commission that would be required to study the structural deficiencies within the current Social Security system and report back with specific legislative proposals for Congress and the President to consider."

Related Topic(s): Budget; Medicare; Republican; Social Security, Add Tags
Add to My Group(s)
Go To Commenting
The views expressed herein are the sole responsibility of the author and do not necessarily reflect those of this website or its editors.