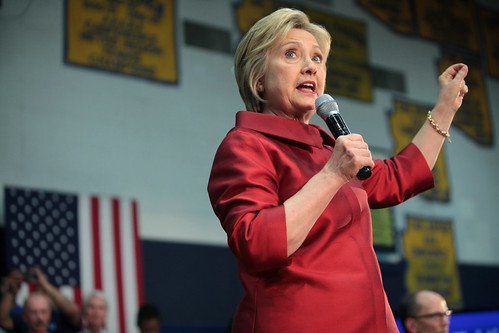 When the Clinton campaign said it would join the recount in three Rust Belt states narrowly lost to Donald Trump, it didn't say its motive was overcoming the vote totals but instead to find out if there was "foreign interference" in the election.

"This election cycle was unique in the degree of foreign interference witnessed throughout the campaign," wrote Clinton campaign counsel Marc Elias. "The U.S. government concluded that Russian state actors were behind the hacks of the Democratic National Committee and the personal email accounts of Hillary for America campaign officials."

During the campaign Hillary Clinton made no secret of where she thought that foreign interference might be coming from. She repeatedly blamed Russia for trying to sway the election.

When the Green Party's Jill Stein launched her recount campaign in Wisconsin, Michigan and Pennsylvania (the three states that gave Trump the victory), Stein's announcement quoted her on her website as saying that because "foreign agents" had "hacked into party databases, private email servers, and voter databases in certain states, many Americans are wondering if our election results are reliable." Stein's page was then updated to eliminate reference to "foreign agents" in her quote.

But her recount petition filed in Wisconsin begins by saying "it was widely reported that foreign operators breached voter registration databases in at least two states and stole hundreds of thousands of voter records." The petition then says the U.S. intelligence community is "confident" Russia was behind the hacks. There is "well-documented and conclusive evidence of foreign interference in the presidential race before the election ... [that] call[s] into question the results and indicate the possibility that (a) widespread breach occurred," Stein's lawyers wrote.

In fact the intelligence community has never made public its evidence for independent computer experts to weigh in on. After the election, the Obama administration said it had no proof of Russian interference in the election tallies and that the results "accurately reflect the will of the American people."

Nevertheless, Exhibit A in Stein's petition is an affidavit from Professor J. Alex Halderman, a professor of computer science at the University of Michigan, who alleges that Russia hacked the election. Halderman took part in a conference call with the Clinton campaign last month trying to convince the campaign to seek a recount, which it only did after Stein launched her effort.

Exhibit B from Stein's petition is an article from Wired Magazine about Russia's alleged role in the hack. Exhibit C is a New York Times article quoting DellSecureWorks, a private security firm, saying Russia was behind the hack of Clinton campaign chairman John Podesta. The company says Podesta clicked on a phishing link to gain access to his account. The Times relied on the company's word that Russian spies were behind the phishing expedition, without also offering any proof that could be analyzed by other computer security experts.

Exhibits D through G -- meaning all of Stein's exhibits -- are on alleged Russian hacking. One article is about an alleged attempted Russian hack of the 2014, post-coup Ukrainian election.

In her many media appearances since launching the recount campaign, Stein has carefully avoided mentioning Russia, or foreign agents, as she inadvertently did in her initial web posting. But her petition is about nothing else but Russia's alleged hacking of the election.

Scott McLarty, the Green Party national media coordinator, told me in an email last week that the Green Party has "not taken a position on meddling by foreign agents." Since then, top Green Party officials have distanced themselves from Stein, including her running mate, Ajamu Baraka.

"I'm not in favor of the recount," Baraka told CNN. He said he told Stein "it was a potentially dangerous move" because it "would be seen as carrying the water for the Democrats."

Margaret Flowers, the Green's Senate candidate in Maryland, posted an open letter signed by several prominent party members saying, "While we support electoral reforms, including how the vote is counted, we do not support the current recount being undertaken by Jill Stein."

Related Topic(s): Election; Integrity; Recount; Voting, Add Tags
Add to My Group(s)
Go To Commenting
The views expressed herein are the sole responsibility of the author and do not necessarily reflect those of this website or its editors.